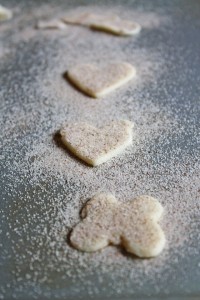 My youngest sister, Anna, gets to contribute one thing and one thing only to Thanksgiving dinner: Pie Crust Cookies. You’d think cookies made from pie crust sprinkled with cinnamon and sugar would be pretty average, but you’d be wrong: pie crust cookies are really, really tasty. Especially if you start with good pie crust. They disappear very quickly and never make it to the dessert table. They usually don’t even make it past dinner preparations; if you don’t hang around the kitchen waiting for them, you’re likely to miss them altogether! 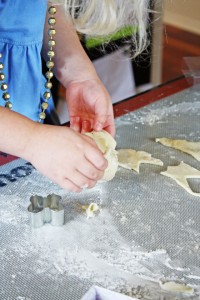 Preheat the oven to whatever temperature your pie crust recipe (or box) calls for. In a small bowl, combine cinnamon and sugar. Roll out the pie crust as you would for a pie. Use cookie cutters to cut the crust into fun shapes, and place cut-outs on ungreased baking sheets. Sprinkle generously with the cinnamon and sugar mixture, and bake until lightly golden. Allow to cool before eating.