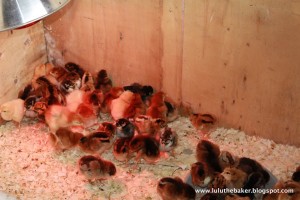 Bright and early Sunday morning, my husband’s phone rang. It was the post office. The day we’d been waiting for had arrived: our chicks were here!

Lesson #1 in Backyard Farming: You can have baby chicks sent to you through the mail!

The first Spring we were in our house, which was several Springs ago, we bought two little Barred Rock chicks from the local farm store. We named them Phil and Lil. They were adorable, of course, and we kept them in a box in our garage until they were feathered out and big enough to go outside. We bought them a “chicken tractor” off Craigslist and put them in our backyard to eat bugs and peck at our vegetable garden. It didn’t take long for some nosy neighbor to rat us out, and our HOA made us give them away, despite the city ordinance allowing us to have them. It was a sad day.

In early Spring 2010, we were inspired to try backyard chickens again when I very distinctly heard one in someone’s backyard on a walk around the block. We figured if they could defy the HOA, then so could we! This time, we decided to order our chicks from Murray McMurray Hatchery and have them shipped to us, but why order 2 chicks when you can order 25, right? Slightly over half of those were meat birds (terrible, fat, lazy Frankenstein chicks–blech), but we had a sweet flock of 12 chickens running all around our backyard all Spring and Summer, getting fat and happy. 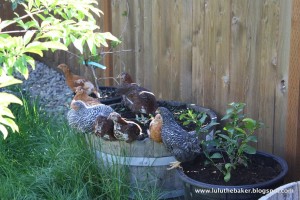 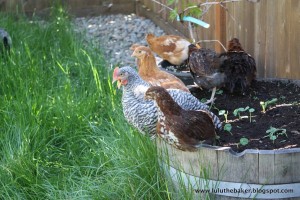 Right before they started laying, we let the girls each pick one to keep, and sent the rest down to my in-law’s farm. Our oldest kept a beautiful Buff Orpington, and our youngest kept a gorgeous Silver-Laced Wyandotte. They kept our egg carton fully stocked, and dutifully ate all of the bugs in our backyard. They even scared off a pesky possum we had running around the yard last Fall.

So, Spring is here again, and we’ve decided to add to our little backyard flock. We have a Buff Orpington to replace (it sadly got attacked by the farm dog over Christmas break), and I wanted something to lay lovely blue eggs, so we also ordered an Araucana/Americana. I was already excited for our new chicks to arrive, but my anticipation sky-rocketted when I learned that the hatchery was running a promotion: they would include a free, surprise rare breed chick with our order! Call me crazy, but I think that is the best combination of things ever. The 5 year-old in me loves that it’s a soft, fluffy baby chick, the cheapskate in me loves that it’s free, and the big dork in me loves that it’s a surprise breed that we get to try and classify.  The hatchery doesn’t even keep track of what they send you, so basically nobody knows at this point! My husband and I had a lot of fun yesterday (because we’re nerdy like that) trying to figure out which of the chicks is the rare breed (it’s not that they all look alike, but not a single chick in our batch looks completely unique), and which of the rare breeds it is using our handy hatchery catalog. Our official guess is a Cuckoo Maran; I’ll let you know when we know for sure!

Lesson #2 in Backyard Farming:  Catalogs are super fun to look at. It doesn’t even matter what they’re selling. Some of my favorites are the seed catalog, the farm equipment catalog (I don’t even know why we get that one), and the chicken catalog.

Oh yeah, and my husband ordered 43 other chicks too. Because he’s crazier than I am. 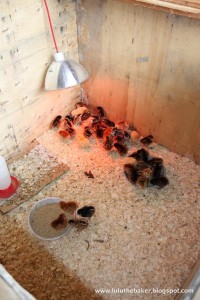 *All chicken illustrations are from the McMurray Hatchery website.