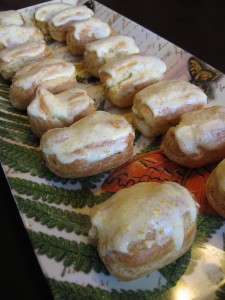 As soon as I get my Daring Bakers challenges, I immediately start thinking of ways I can play with the recipe to make it different and still delicious. The recipe we were given specifically stated that you could freeze the freshly piped but still raw pastry dough, so instead of making 2 dozen chocolate eclairs, I froze half of the raw pastry fingers and saved them for another day. The eclairs themselves actually turned out better than the first time. They puffed beautifully and were lovely and very hollow inside. I had every intention of making a key lime filling and doing some kind of vanilla glaze, but then I happened upon Emeril’s recipe for Vanilla and Orange Pastry Cream on foodnetwork.com and I swear I heard a chorus of angels singing. The pastry cream DID turn out delicious, but I ran into a few snags. Snag #1: Because I had made half the number of eclairs, I figured I needed half the amount of pastry cream. Things were going smoothly until I added the last ingredient–cornstarch–in the full amount instead of halving it. Luckily, I hadn’t added the egg/cornstarch combo to the milk/sugar/vanilla bean combo, so I only wasted cornstarch and eggs. The big problem was that I had MAYBE enough cornstarch left, so I couldn’t mess up again. Snag #2: It says to cook the entire thing on medium heat until it coats the back of a spoon. According to the recipe, this should take 3 minutes, but it only took mine about 30 seconds. It ended up being a little thicker than I would have liked, but I beat the heck out of it with my wooden spoon and I think it turned out ok. My only other complaint is that, while the vanilla flavor really came through, the orange was way too subtle. I fixed that by doing a vanilla glaze with lots of orange zest in it. C’est magnifique! 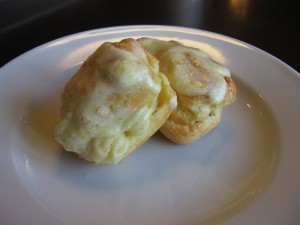