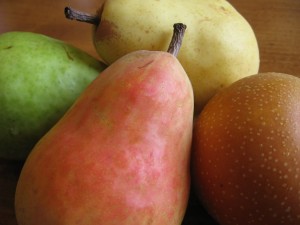 I feel like I haven’t posted in forever, but that doesn’t mean I haven’t been busy in the kitchen. Early autumn means harvest time, and I have been working like mad to can everything I can think of. To date, I have done 3 different kinds of jam (I desperately wanted to try plum jam, but I’m just about out of gas), tomatoes from my very own back yard, beautiful peach halves, and, as of last night, pear sauce. My husband came home while the pears were cooking on the stove top, and he said the house smelled like heaven. That is exactly what this delicious pear sauce tastes like: heaven in a jar. 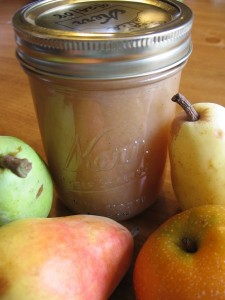 Twist the stems off the pears, cut the fruit into quarters, and throw into a large stock pot. Add lemon juice and SOME water. I used 1 cup and my sauce is thinner than I would like. Maybe start with 1/2 cup of water instead. Cook until pears are very, very soft. Run mixture through a food mill. This will mulch up the pears, plus remove the skins and seeds, which is perfect if you are lazy like me. Return pears to pot, add sugar and cinnamon to taste, and bring to a boil. Pour smokin’ hot pear sauce into smokin’ hot, clean jars (I used pints), leaving 1/2″ head space. Put on lids, and process for 15 minutes in a boiling water bath.

I had a little church potluck to attend this afternoon and had no idea what to take. As I was putting the shredded wheat away this morning, my eyes glanced at the side of the graham cracker box and I thought, “Hey, why not.” I’ve seen this recipe on the side of the box all summer long as we’ve been making smores, and I thought today I’d give it a whirl. They were super easy to make and tasted really good. If you are a fan of cheesecake but don’t like to go to all the trouble of making one, this easy dessert takes care of it in about 5 minutes. 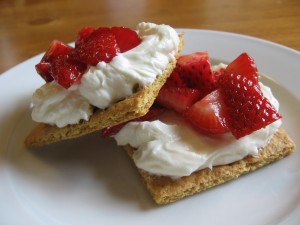 Divide graham crackers into individual portions; set aside. Beat cream cheese and sugar with an electric mixer until smooth. Fold in cool whip. In a separate bowl, toss chopped strawberries with remaining Tablespoon of sugar. Set aside. I set everything out separately and let people make their own. You could also assemble them and place them on a serving tray. 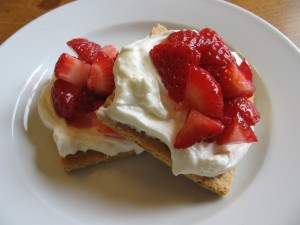