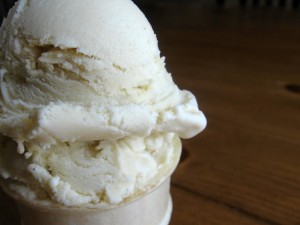 My husband and I got one of those cool Cuisinart ice cream makers for our wedding. You know, the one with the bowl that goes in the freezer and never needs ice. We were really excited about that gift. We even got the extra bowl so that we would never have to wait for the other one to be washed, dried, and refrozen. I guess we thought we’d be making ice cream twice a day or something. Anywho, we tried it once, it failed, and that was that. Then, in February, the Daring Bakers challenge called for homemade ice cream. I believe it was the night before the challenge was due that I finally got around to digging our ice cream maker out of the garage. But the bowl has to freeze for at least 24 hours before it’ll work (which I think was the problem the first time we tried it), so I had to scramble around and borrow one from a friend. Not wanting to be unprepared for the rest of my ice cream-makin’ life, I stuck our bowls in the freezer just in case I ever needed them again. So when I decided to go ahead and make last week’s Sweet Melissa recipe for Brown Sugar Vanilla Bean Ice Cream even though I’d missed the posting date, the stars aligned perfectly to give me exactly enough heavy cream (seriously, TO THE DROP!), a ziplock full of tahitian vanilla beans from ebay that I thought I’d zip through and haven’t, and a pre-frozen bowl just waiting to be used! And the resulting ice cream was delicious. Carmely, rich, smooth; the kind of ice cream you’ll store your ice cream machine bowls in the freezer for. 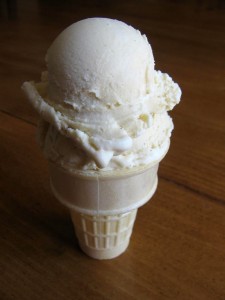 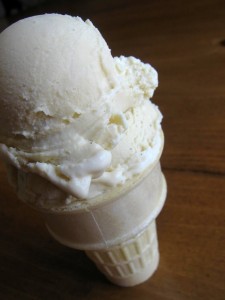