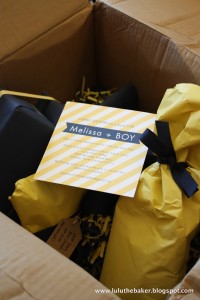 Towards the end of the summer last year, our little boy arrived 11 days early. We spent the afternoon of the day before his birth at the dress rehearsal and group photo session of the folk festival our girls dance in every August, not wise to the fact that Baby Boy would be making his entrance into the world less than 24 hours later. My mom and sister had just flown home Monday morning after staying with us for a few days, and as we drove to the hospital in the wee hours of Tuesday, I called my mom and told her she needed to turn around and come straight back. She got to stay with us for nearly two magnificent weeks after James came.
The afternoon before she left, a big, mysterious box was delivered to the house. She seemed to know something about it, so I assumed it was from her. When I opened it, the box was full of a dozen yellow- and navy-wrapped packages tied with grosgrain ribbons, and again, I assumed that my generous mother had showered me with dozens of baby gifts, and I was very touched. Then I picked up the first gift and read the little tag attached.  And I started crying. The gift wasn’t from my mom (although her small mountain of gifts was further down in the box). It was a sweet message from my friend Ashley, who lived around the corner from us for just one year and moved away right before our second daughter was born almost 4 years ago. The next package was from Jill, who was my best friend all through high school and one of my bridesmaids when I got married almost 8 years ago. We lived down the street from each other until my oldest was 10 months, and now we are lucky if we get to see each other ever. Another package was from Sarah, who’s children I babysat the night after I got engaged, and who I used to talk about books with. There were packages from friends and relatives, all living thousands of miles from me.  My sweet sister had organized the whole thing. She got the invitations printed and sent out, asking “guests” to send all of the presents to her by the end of July. She wrapped everything in coordinating paper and ribbon and stuffed the box full–all without ever mentioning a word to me! 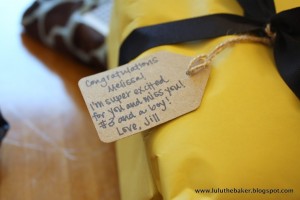 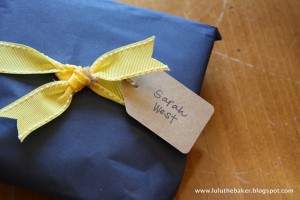 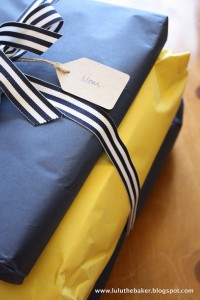 It was one of the most fun, thoughtful gifts I’ve ever received. If you can ever do the same thing for someone you care about who is far from loved ones, do it! 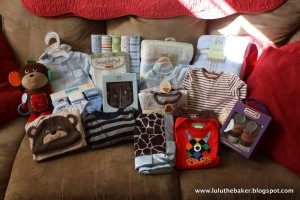 2 thoughts on “The Baby Shower in a Box”