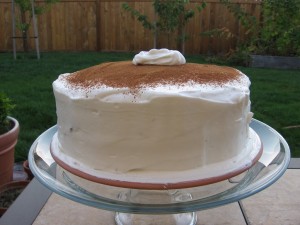 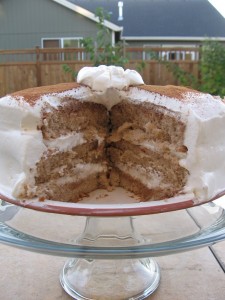 I can’t resist a good excuse to bake, so I joined another baking club, The Cake Slice Bakers. We are baking one cake per month from the book Sky High: Irresistible Triple-Layer Cakes by Alisa Huntsman, Peter Wynne, and Tina Rupp.

Our first challenge was the Cappuccino Chiffon Cake, but, not being a coffee drinker, I substituted Mexican hot chocolate for the espresso in the recipe. I made it when we were having company for dinner, and all I can say is, “WOW!” Words cannot express how delicious this cake was. AND as if its deliciousness weren’t enough, it was really easy to make. Here’s the recipe, with my modifications: 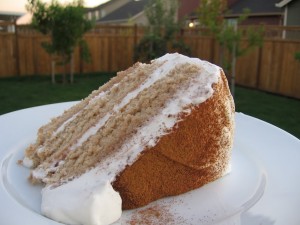 1. Preheat the oven to 350F degrees. Line the bottom s of three 8-inch round cake pans with parchment paper but do not grease.

2. In a medium bowl, combine the oil, egg yolks, Mexican hot chocolate, and vanilla; whisk lightly to blend. In a large mixing bowl, sift together the flour, 1 cup of sugar, the baking powder, cinnamon, and salt. Set aside.

3. In the large bowl of an electric mixer, whip the egg whites with the cream of tartar on medium-low speed until frothy. Raise the mixer to medium high and gradually add the remaining 1/2 cup of sugar. Continue to beat until soft peaks form. Do not whip to stiff peaks or the cake will shrink upon cooling.

4. Add the hot chocolate-egg mixture to the dry ingredients and fold together just until combined. Add one fourth of the egg whites and fold them gently into the batter. Fold in the remaining egg whites just until no streaks remain. Divide the batter among the pans.

5. Bake the cakes for 18 minutes or until a cake tester comes out clean. Allow the cakes to cool completely in the pans. Once cooled run a knife around the edge of the pans to release the cakes. Invert onto a wire rack and remove the parchment papers.

6. To assemble the cake, place one cake layer flat side up on a cake stand or platter. Soak the cake with 1/3 cup of the hot chocolate syrup. Spread 1 and 1/3 cups of whipped cream evenly over the top of the cake. Repeat with the next layer the same steps. Finally top with the third layer. Soak with syrup and frost the top and sides of the cake with the whipped cream.

7. To decorate the cake smooth out the whipped cream as much as possible on top. Lay a paper doily on top and sift cinnamon over the doily to reveal a lacy detail.

In a bowl, stir together the hot chocolate and sugar. Stir until the sugar dissolves.

Place the cream, sugar, and vanilla in large chilled mixing bowl with chilled beaters. With the whip attachment, beat the cream until stiff peaks form.

Mexican Hot Chocolate
I didn’t think this had enough cinnamon in it, so I added more, maybe a 1/4 of a teaspoon. I got the recipe from the Nick Jr. website 🙂

Combine milk, sugar, chocolate, cinnamon stick, and salt in a saucepan. Scrape the vanilla bean seeds into the pan. Heat over low, stirring constantly, until chocolate is melted. 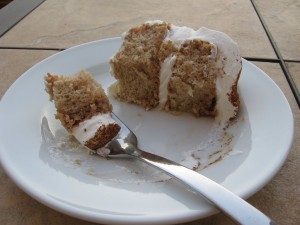