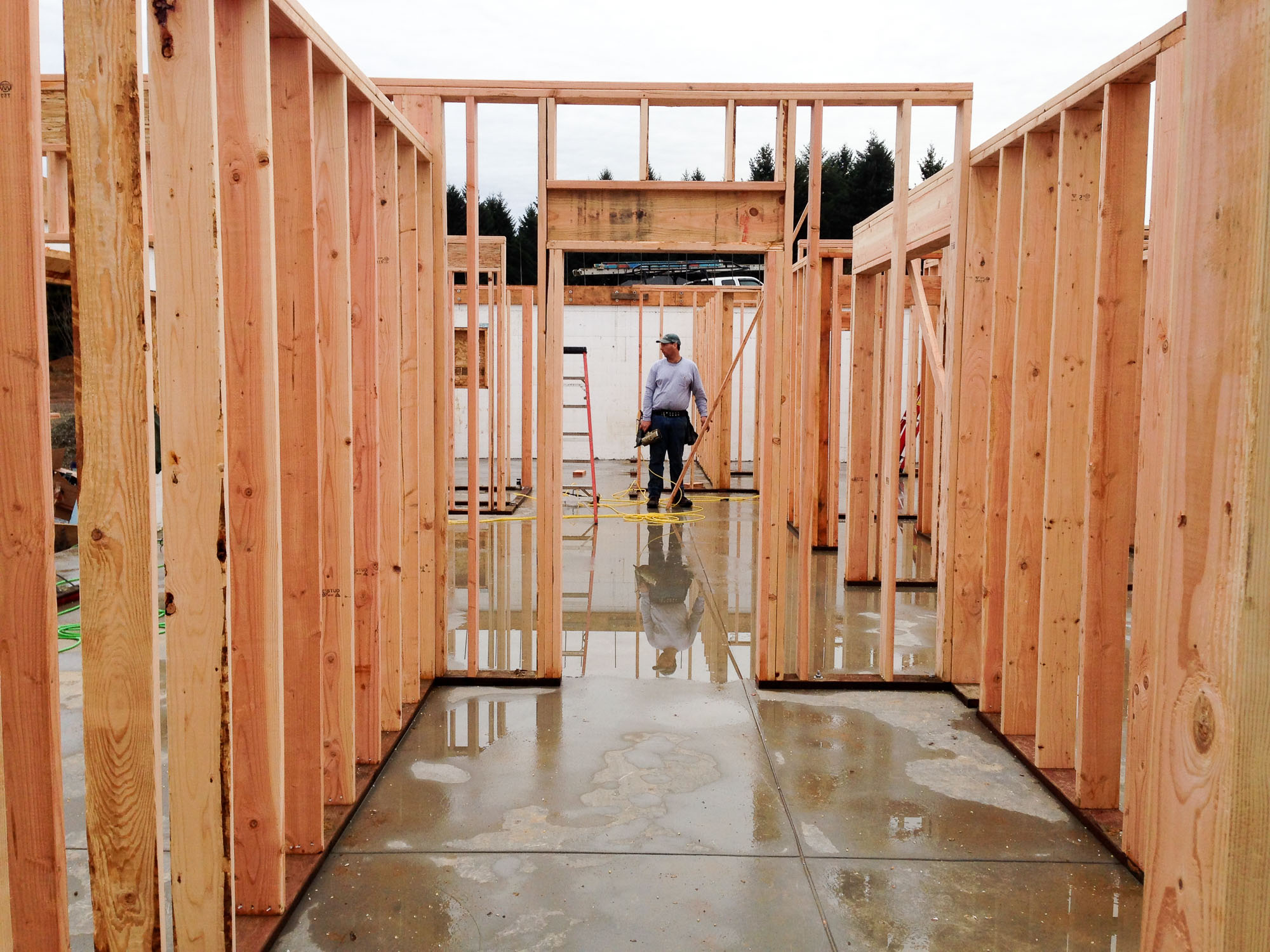 I’m going back in time 5 years to write about how we built our modern farmhouse. You can read all the posts in this series by clicking HERE.

It’s been a couple of months since I wrote my last post about how we built our modern farmhouse (because HOLIDAYS!). Here’s a very quick recap to refresh your memory: We fell in love with our land waaaaay back in September of 2006, but didn’t buy it until the summer of 2010. It was a miracle that no one else bought it in those four years. It took us three more years to start building our house. We finally started excavation and construction in August of 2013. We did ICF (insulated concrete forms) on the basement and main floor, and that’s where we left off at the end of Part 2. 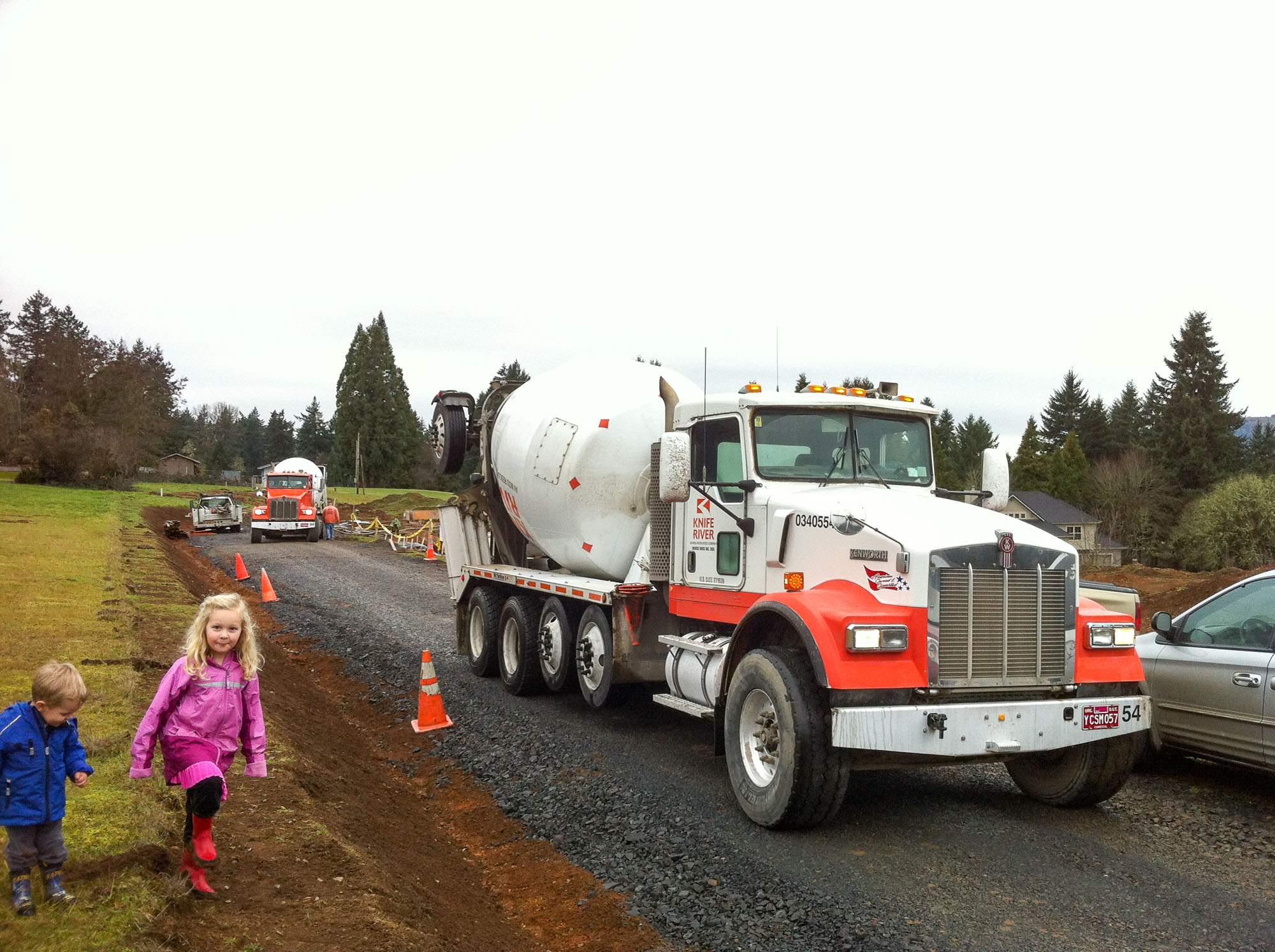 After the construction team got the exterior walls poured in the basement, they poured the slab and framed all the interior walls, then installed the basement ceiling/main floor subflooring. They wrapped the whole basement in a protective layer to prevent water seepage, placed massive concrete supports for the front porch, and backfilled with gravel. 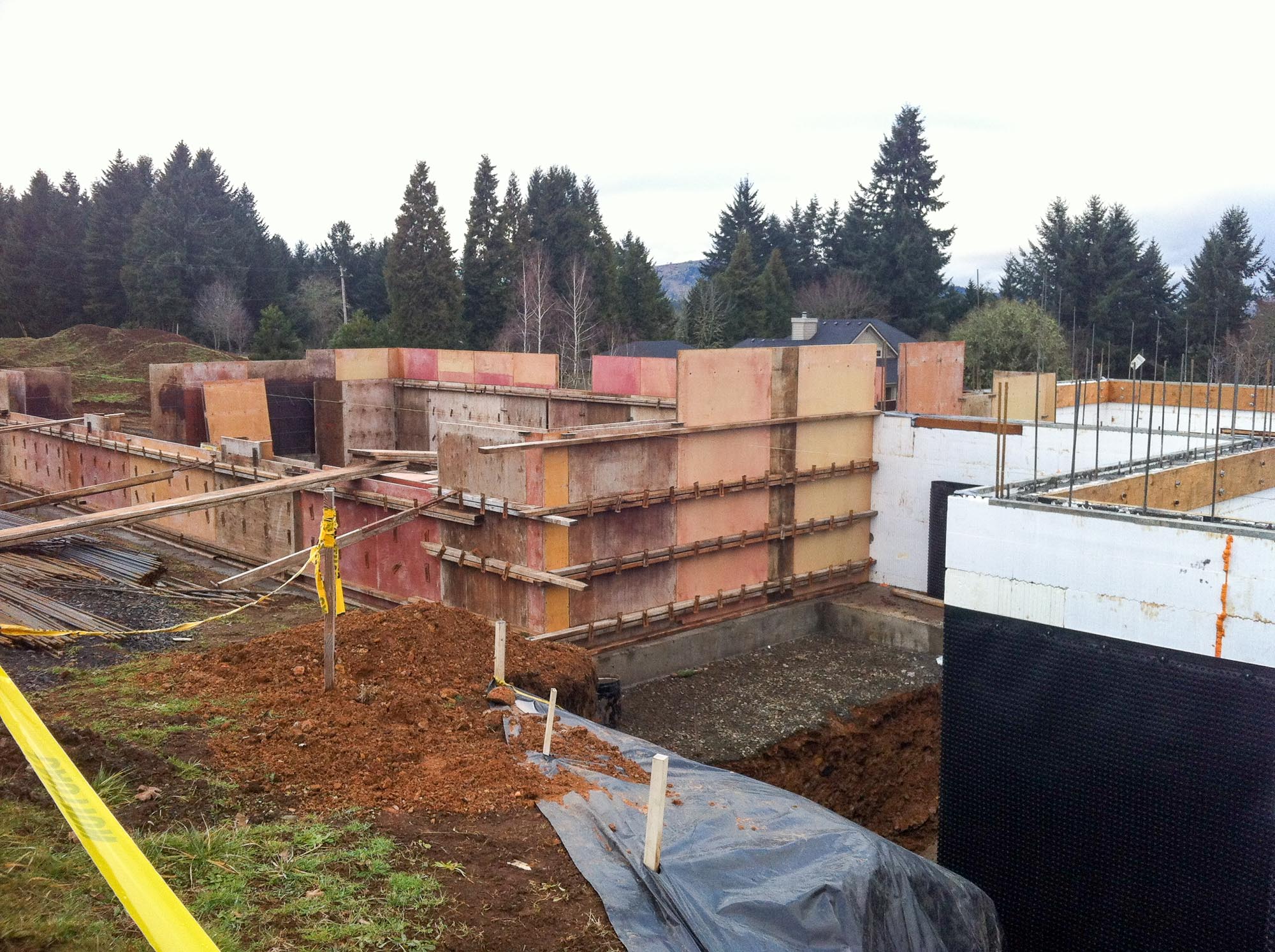 January 2014: This is the garage. It is the only part of the house that doesn’t have basement underneath, and it isn’t ICF. It just has a regular old slab foundation, stem walls, and timber framing. This mass of wooden planks makes up the forms for the stem walls, which got poured shortly after this photo. 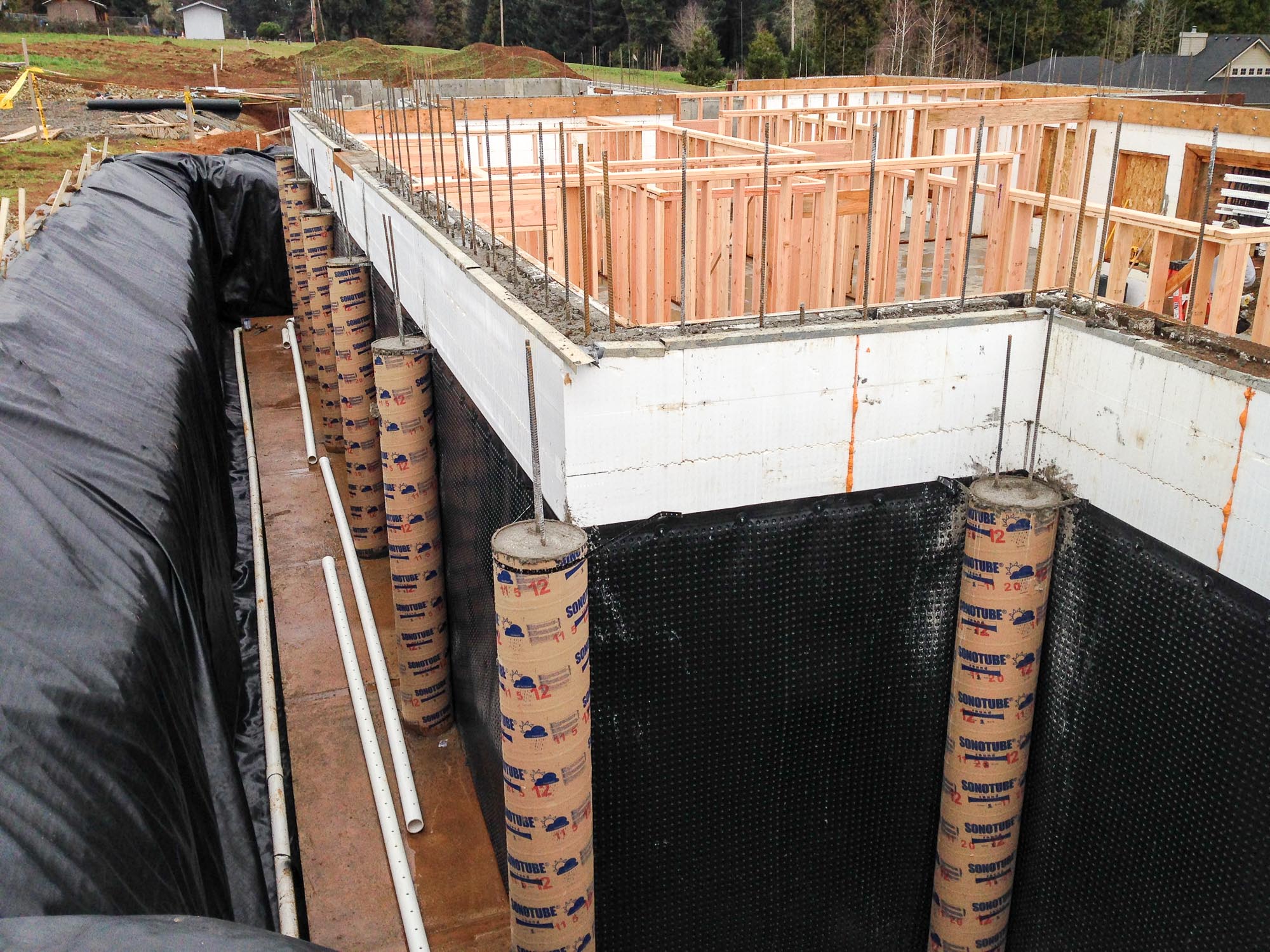 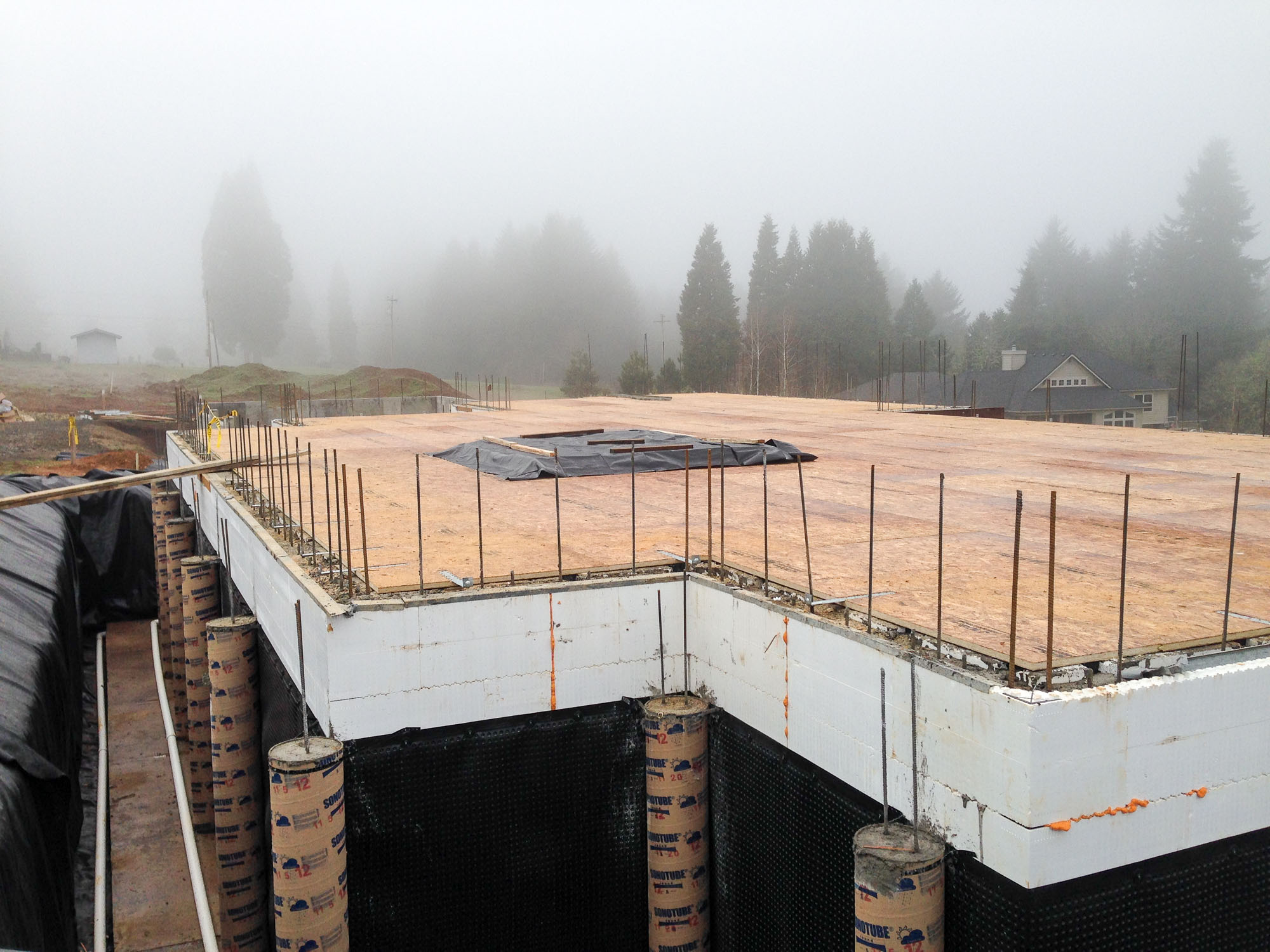 This photo was taken from the same vantage point as the previous picture, but with a couple of differences. The basement ceiling/main floor subflooring has been installed and the french drains around the base of the foundation are in place. That black, tarp-covered square in the middle of the floor is the hole where the stairs will go down to the basement. The beams extending from the left side of the photo into the house mark where the front door will be.

Next, they repeated the ICF process for the main floor: styrofoam forms reinforced with rebar, then concrete. All together, the ICF stage of construction lasted for about 4 months and took us into March 2014. 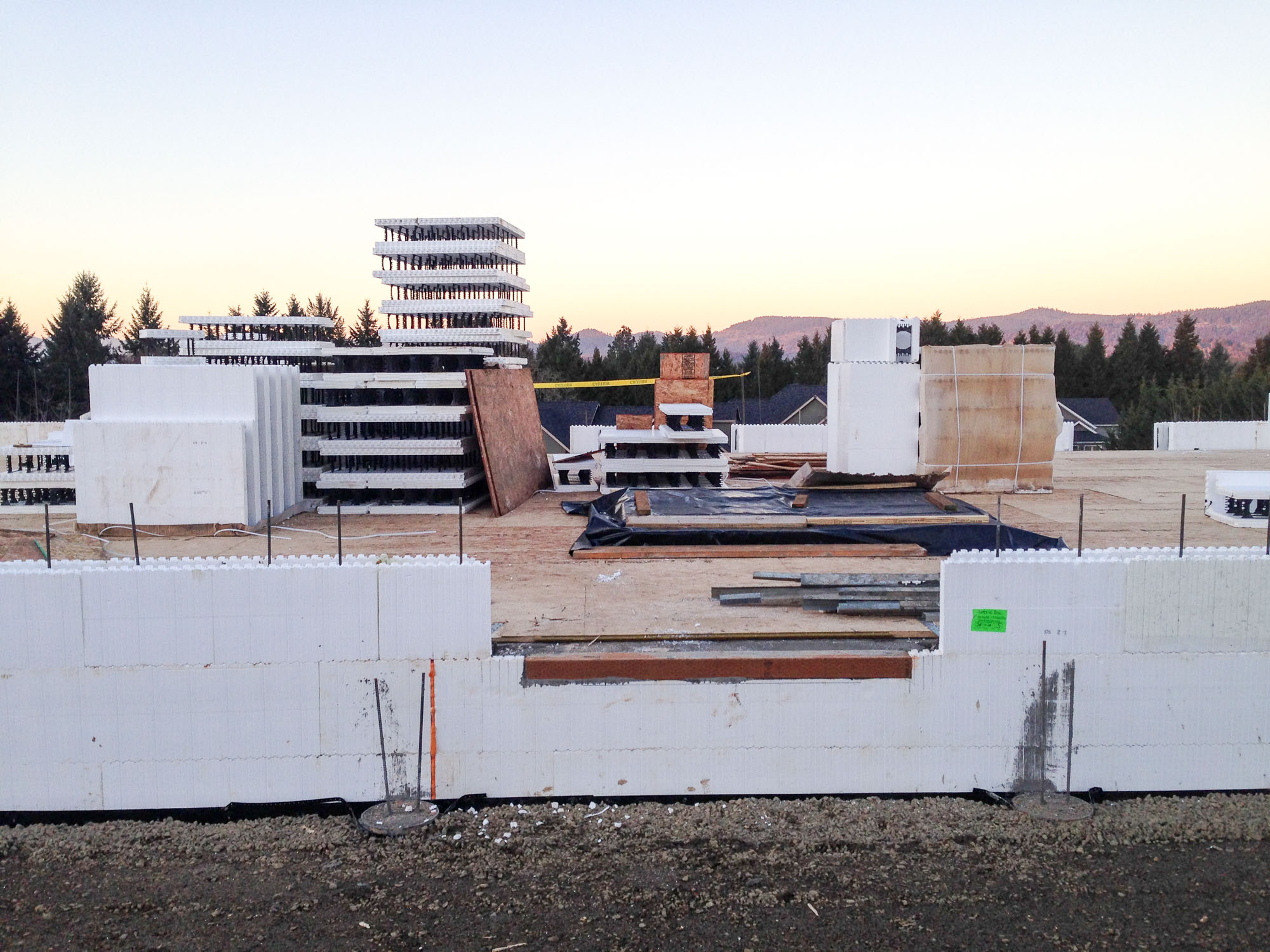 This view is of the front of the house. The gap between the house and the ground has been filled in with gravel, and the ICF for the main floor is just beginning to be installed. That little notch cut out of the ICF is for the front door! You can see two of the front porch support pillars poking up out of the gravel. 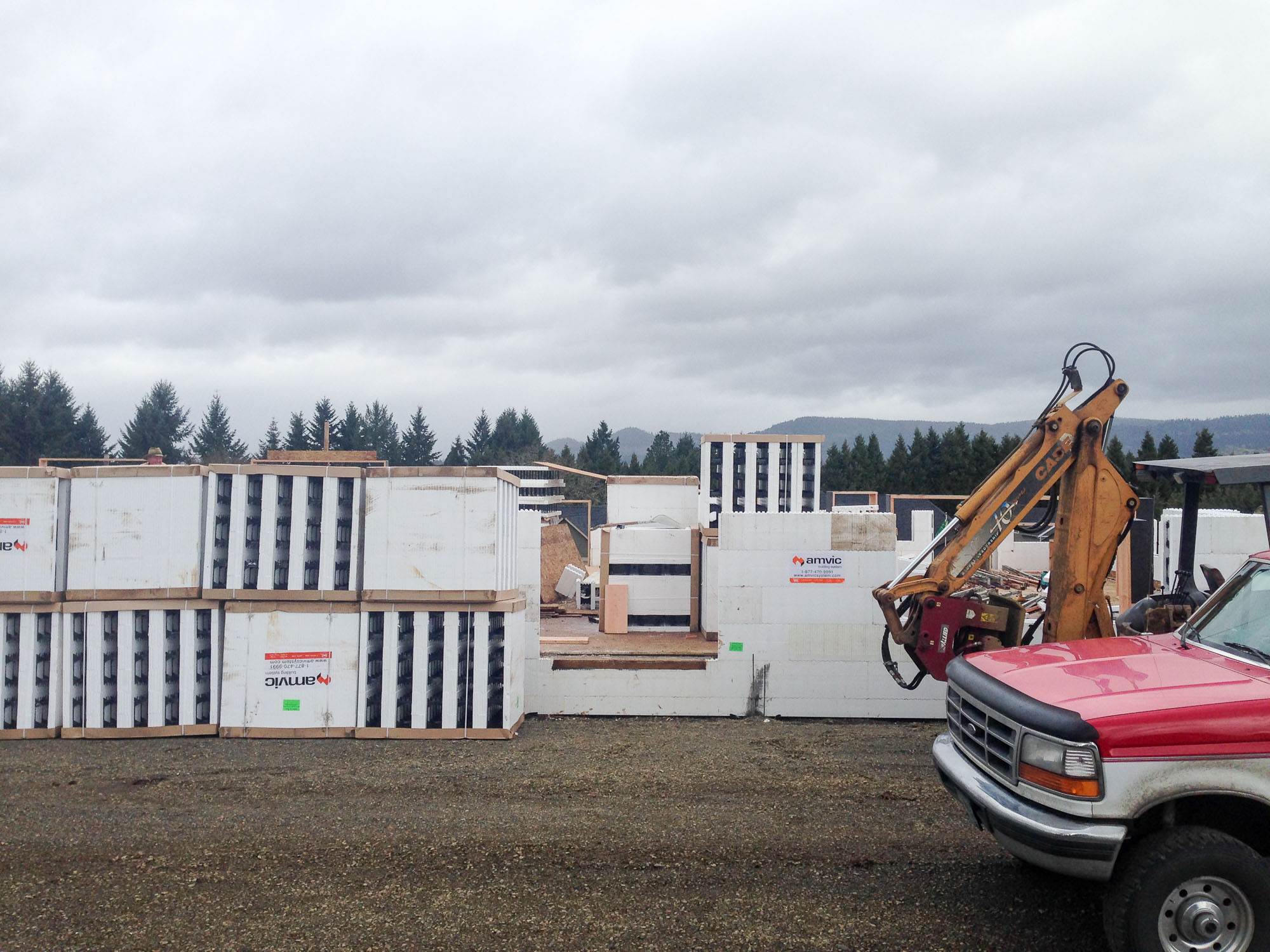 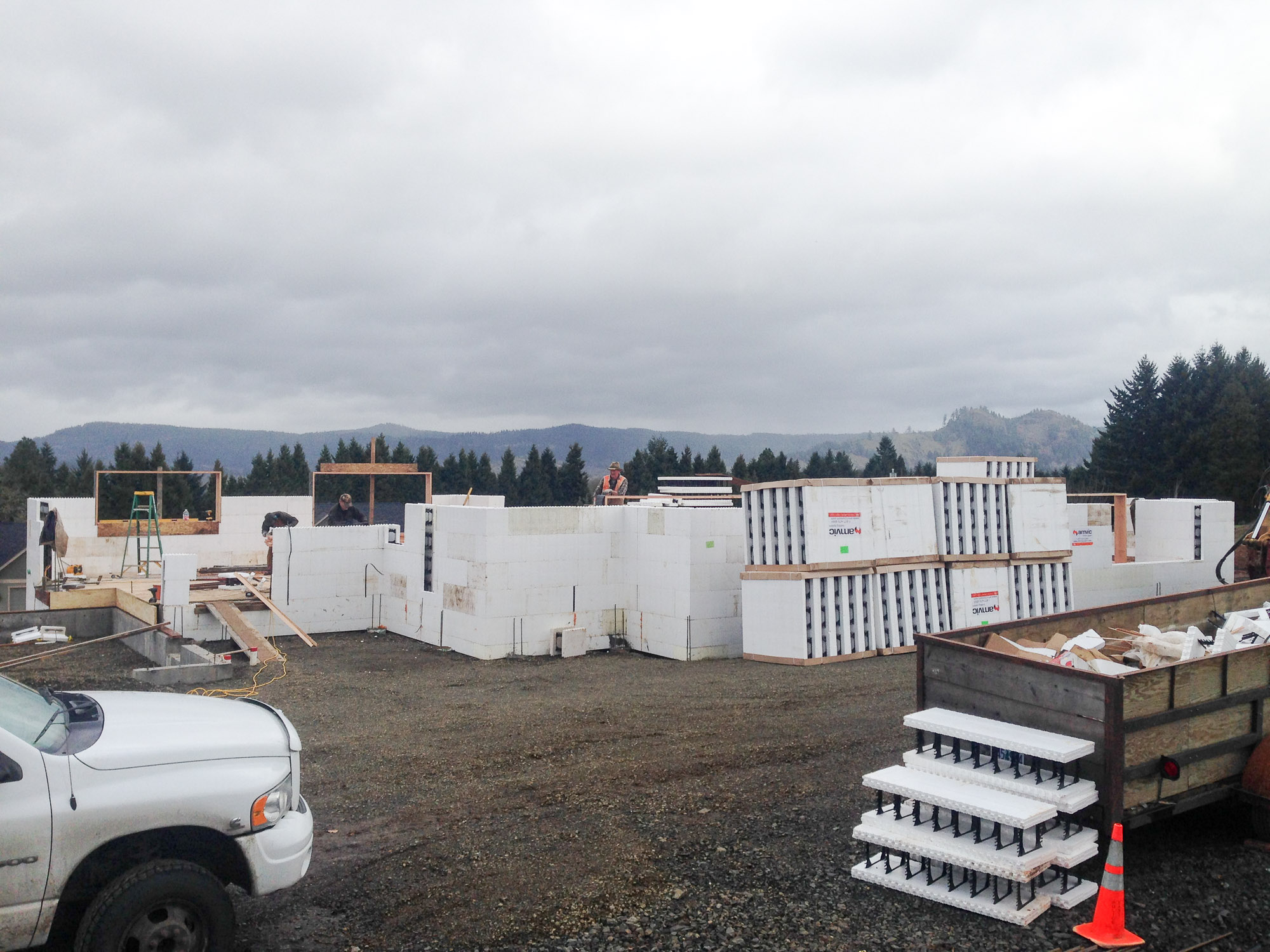 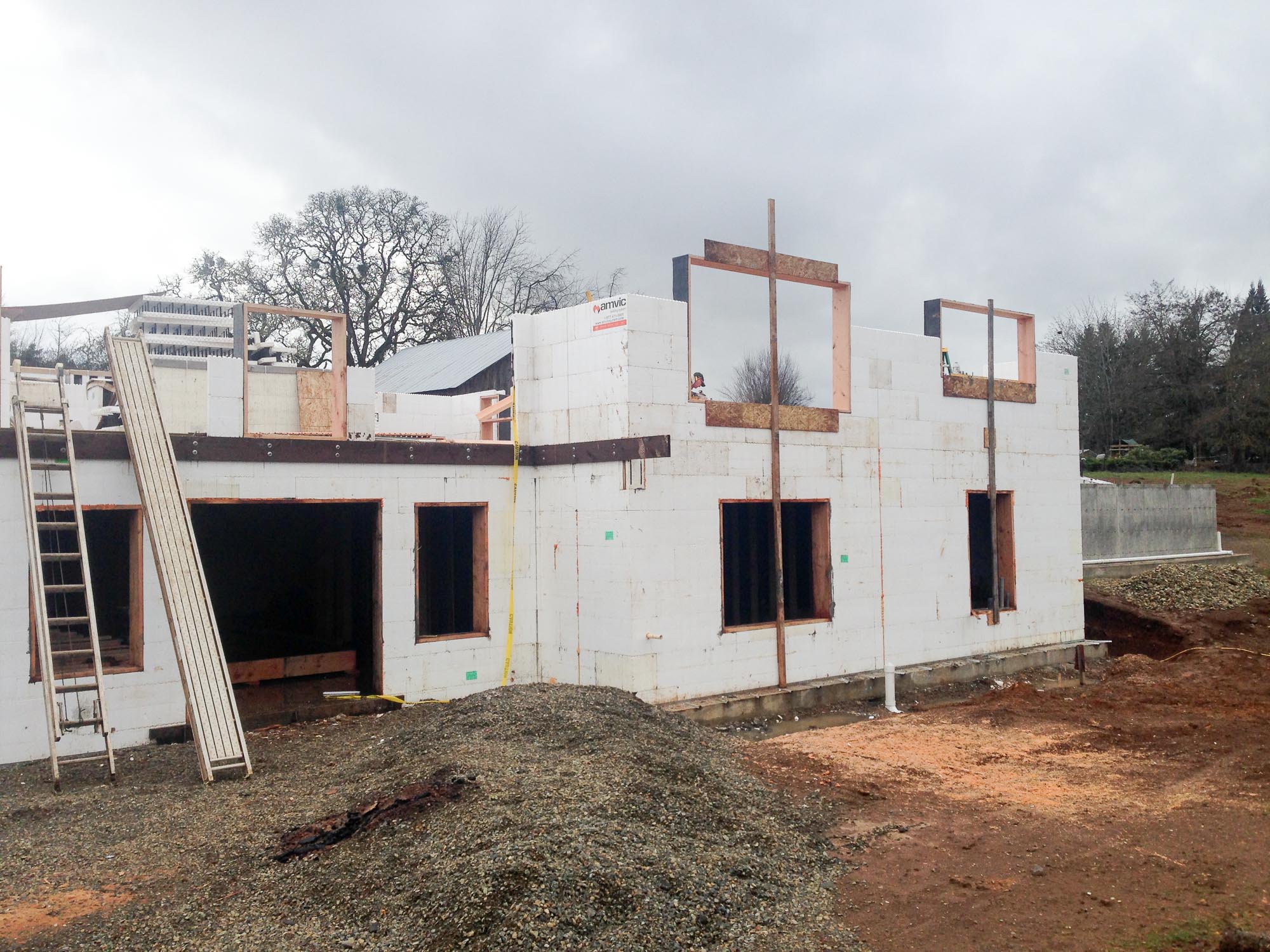 A view of the back! The big opening that goes all the way to the ground is the back door, with windows on each side. The next opening to the right goes into what is now my office. Right above my office window is the big window into the breakfast nook. To the right of that is a laundry room window. 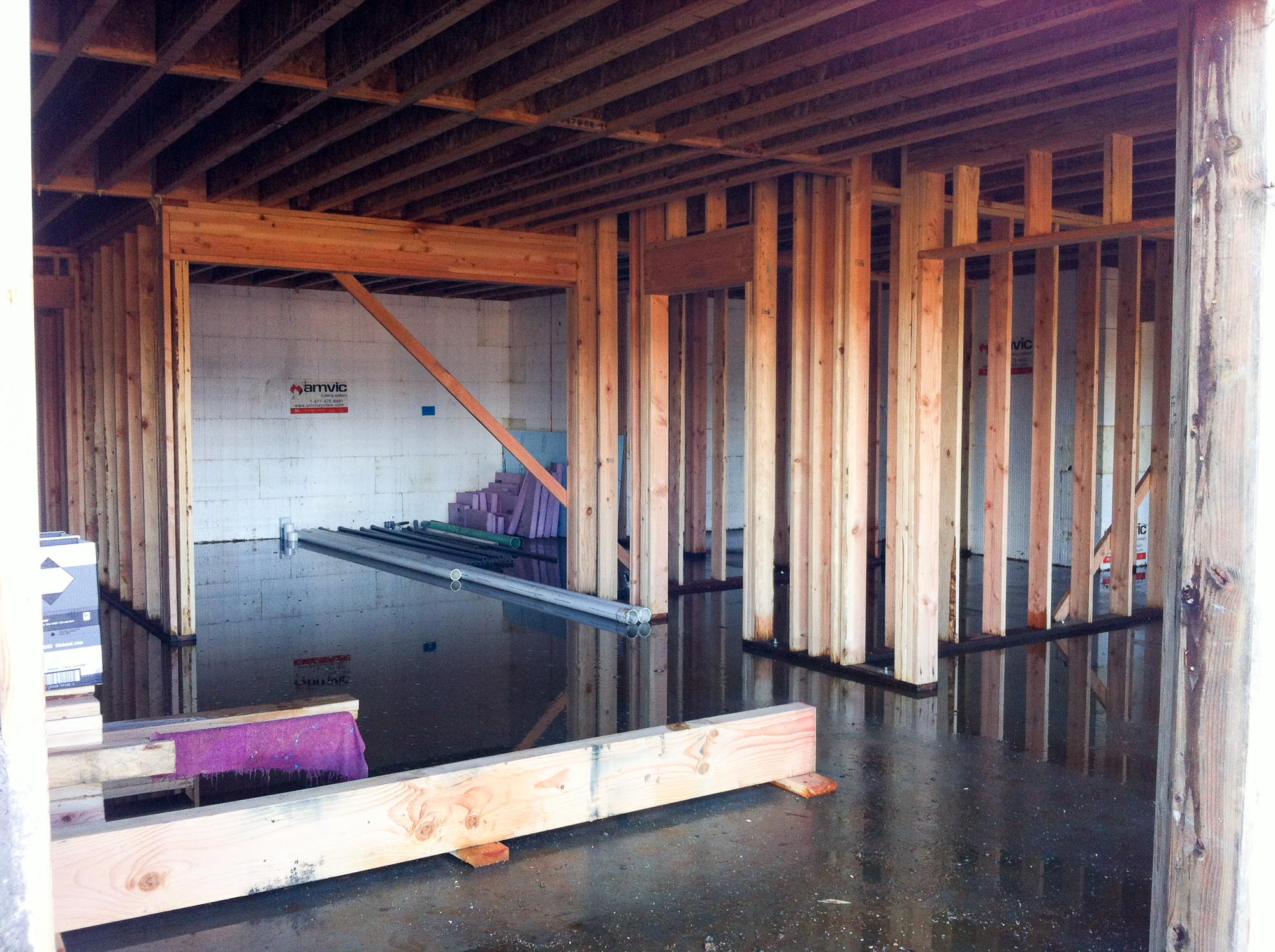 The basement stayed dark and damp for so long! 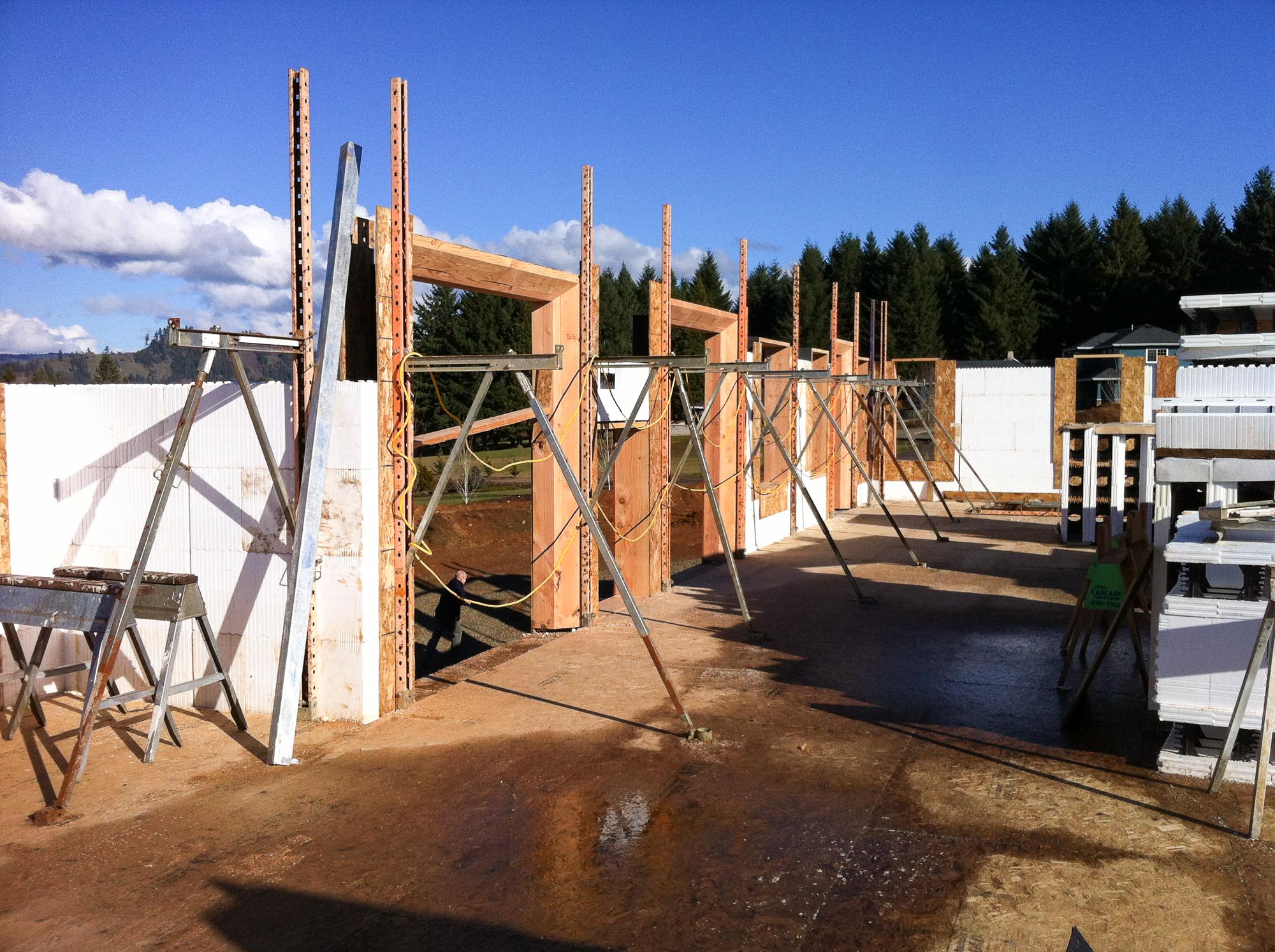 This view is toward the back of the house. I’m standing in what will be the kitchen looking at what will be two pairs of french doors in the family room with a fireplace in between them, and a whole bunch of windows in the master bedroom. I don’t have many regrets about our house design, but if we were to build it again, we’d do three sets of french doors instead of two, and we’d put the fireplace somewhere else entirely. 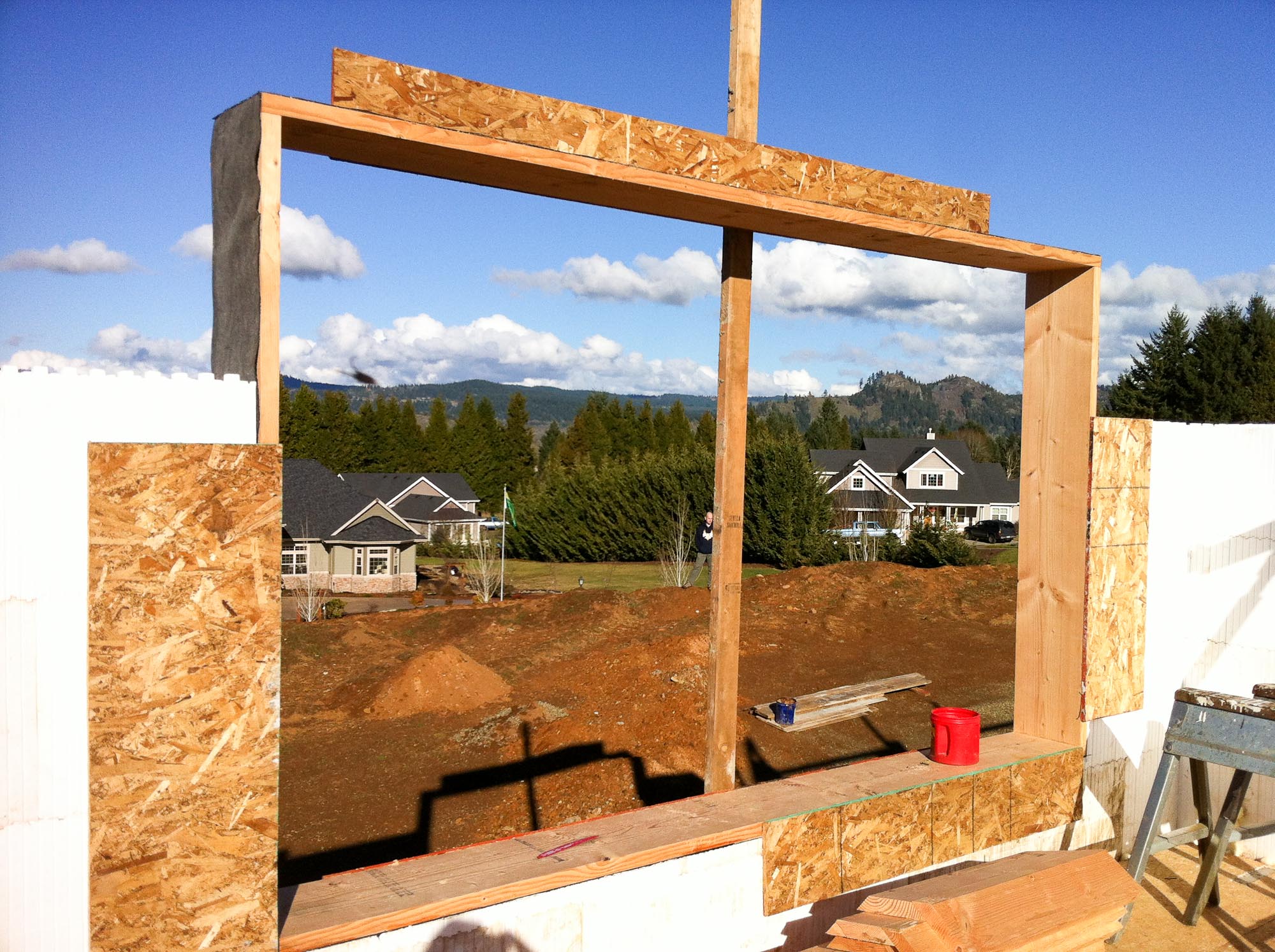 View out the breakfast nook window! Those tall trees in the background have gotten even taller in the last five years! 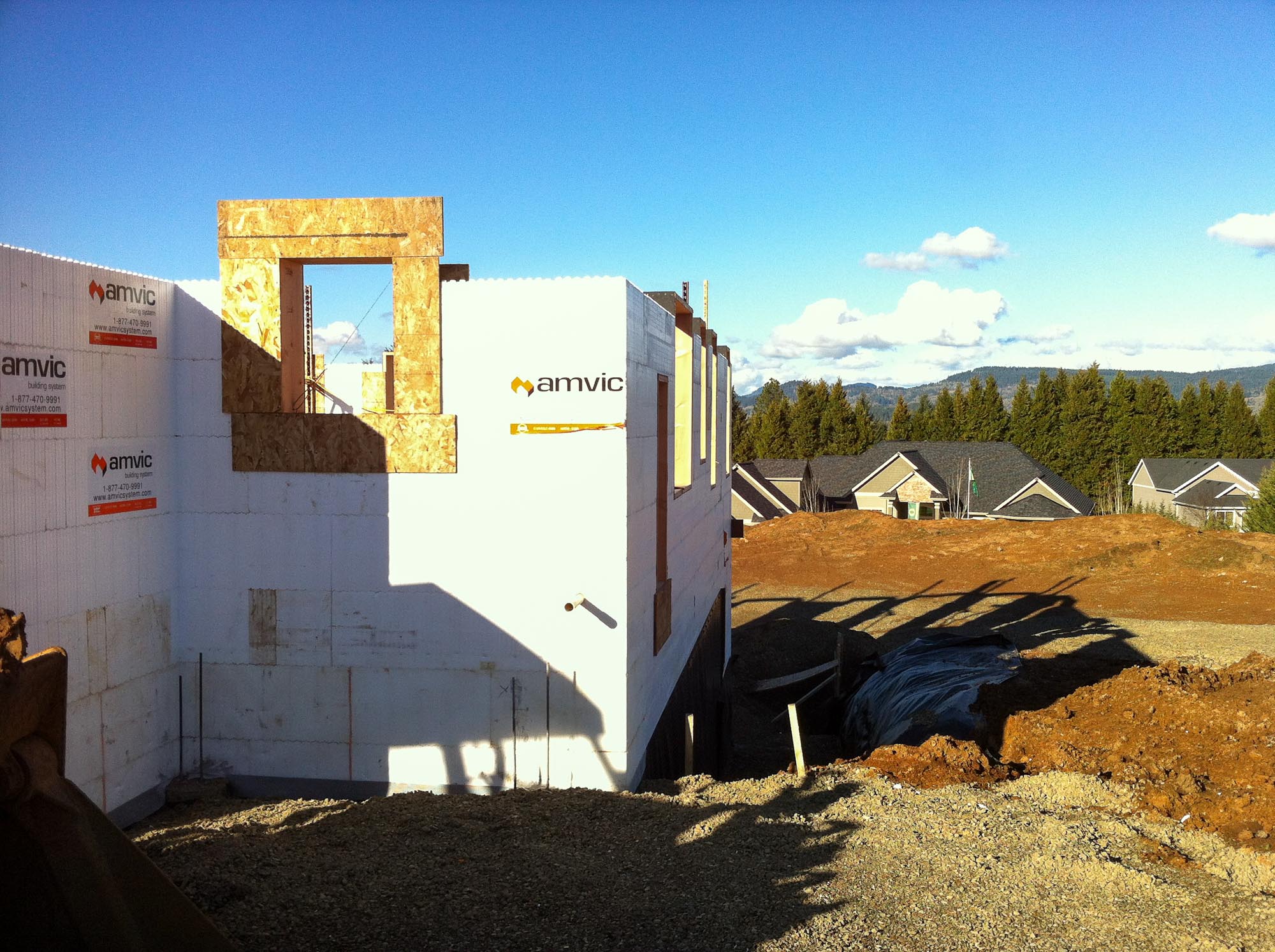 Funny story: One day, I showed up at the construction site, and they had framed in this window. It looks into the master bathroom shower and was right at eye level! No frosted glass or anything. Thankfully this was before they poured the concrete! They reframed it, made it a long, skinny, horizontal window, and moved it up the quite a bit higher. 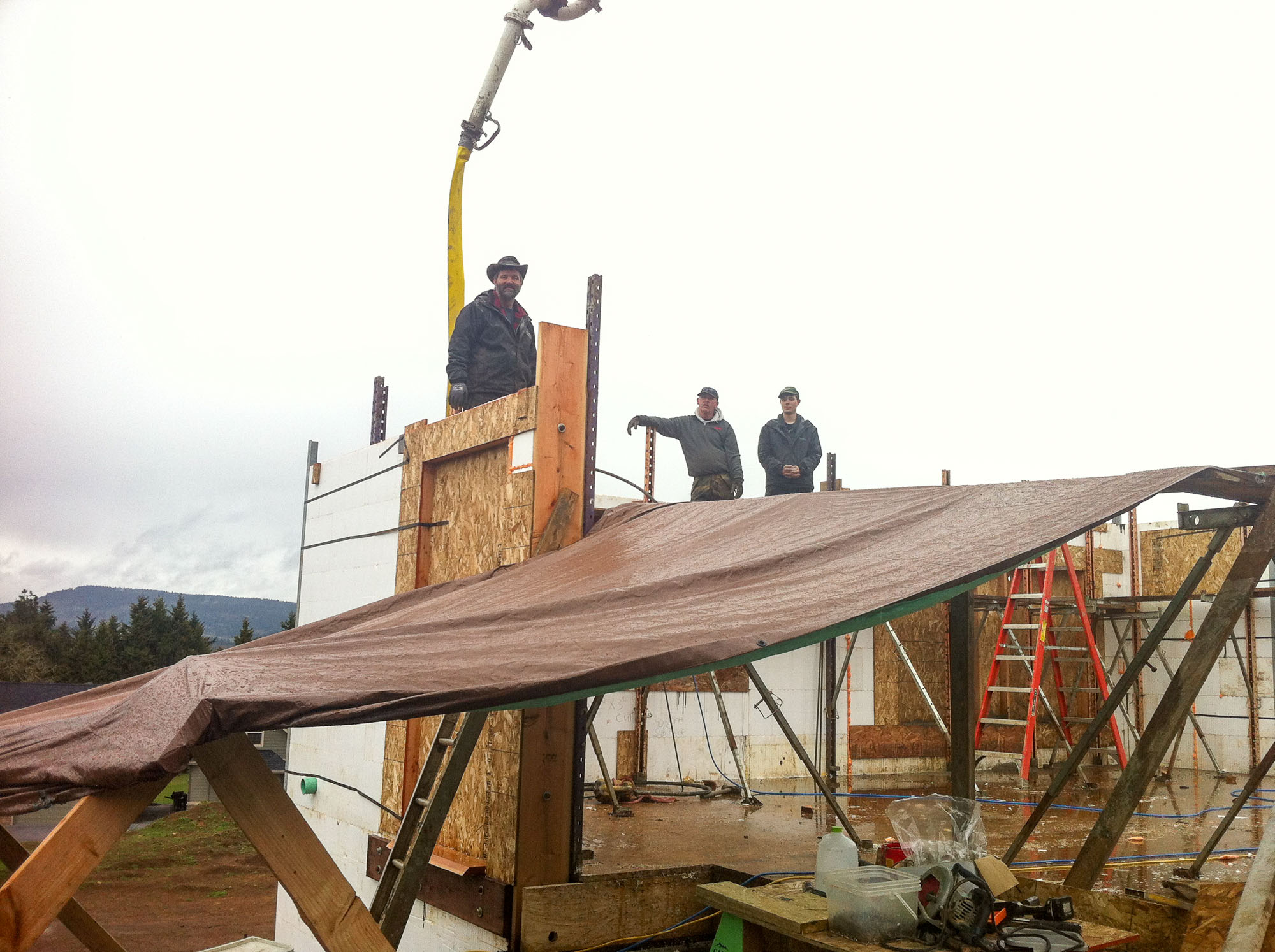 Pouring concrete into the walls! 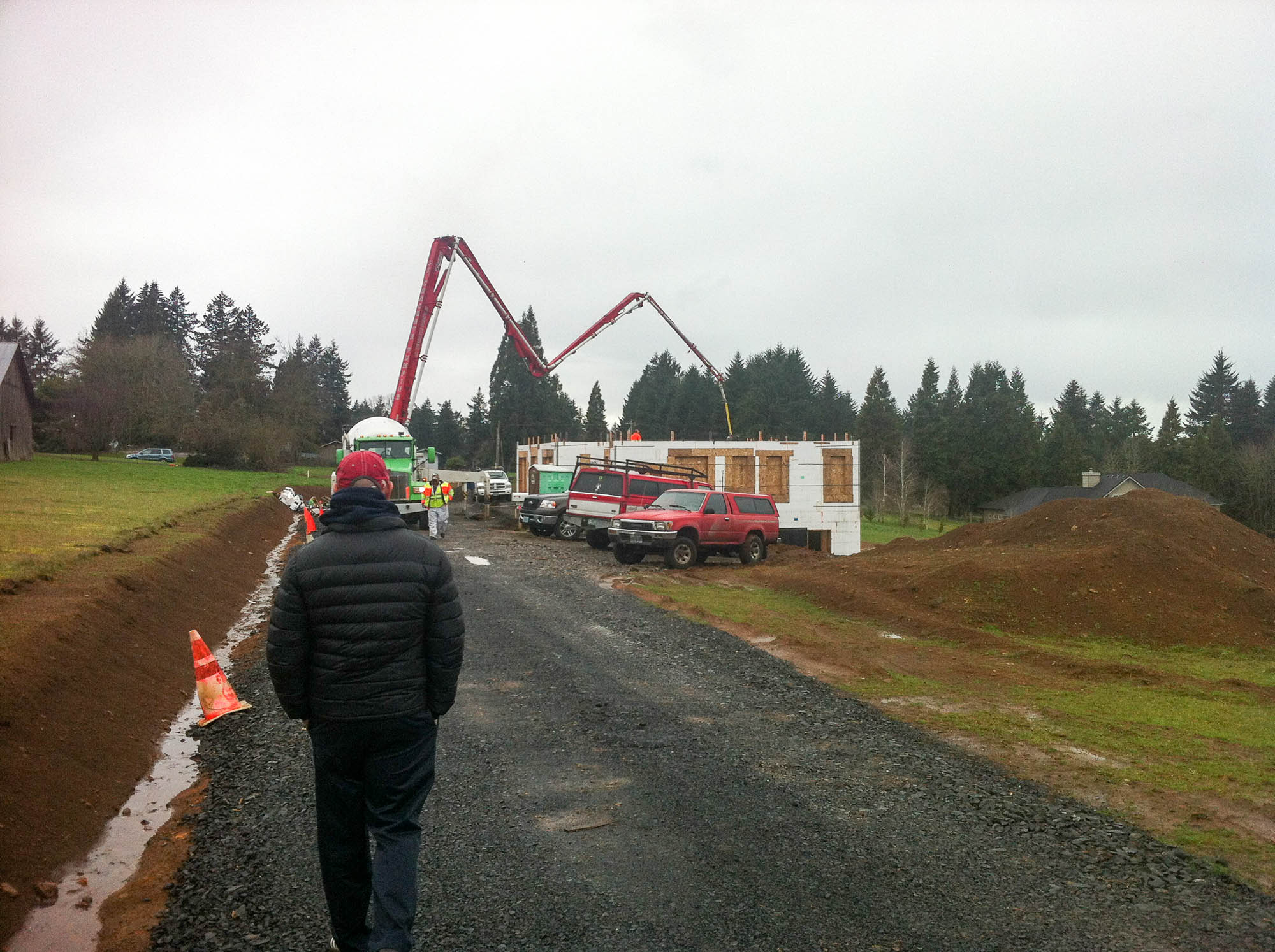 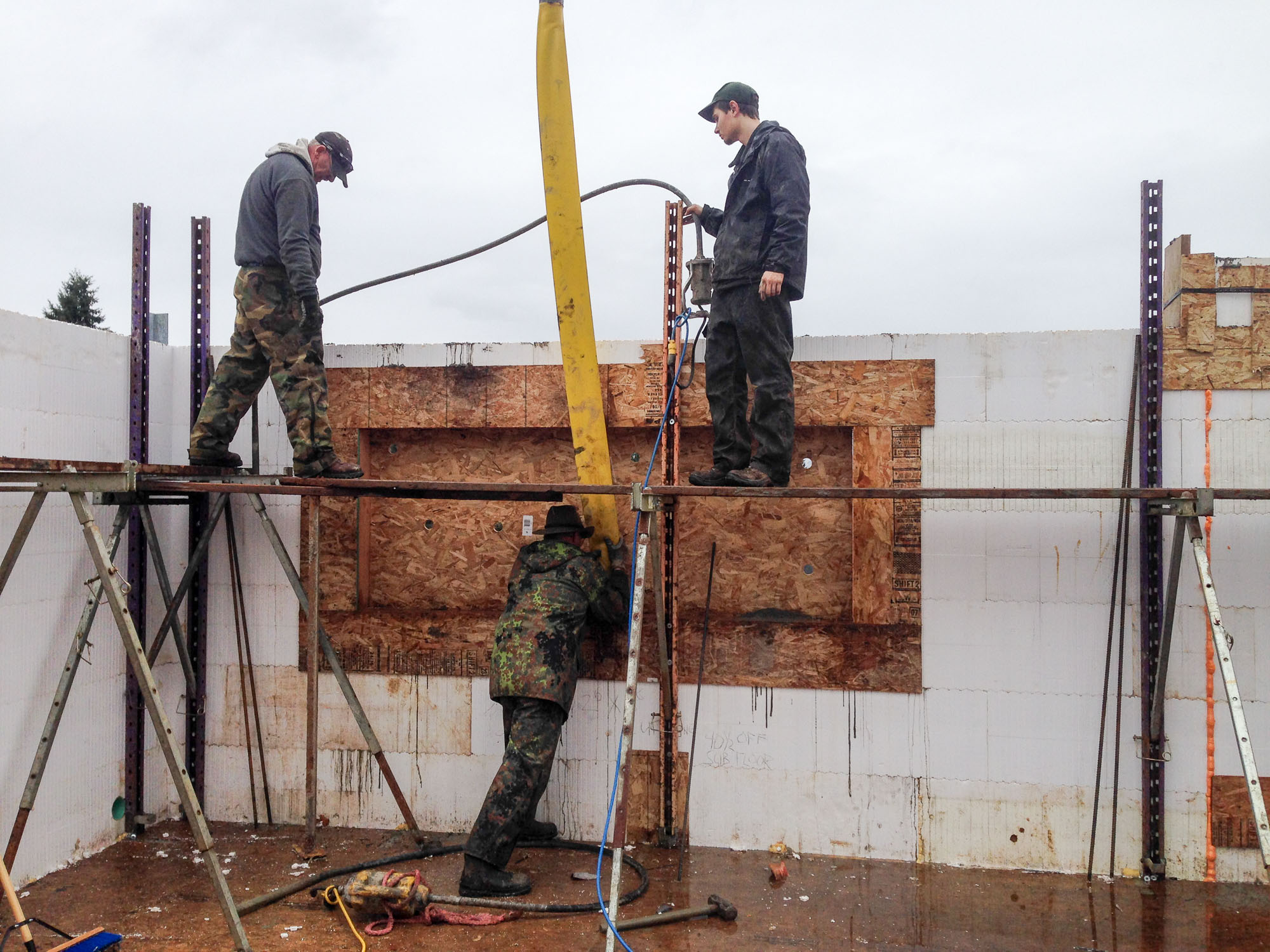 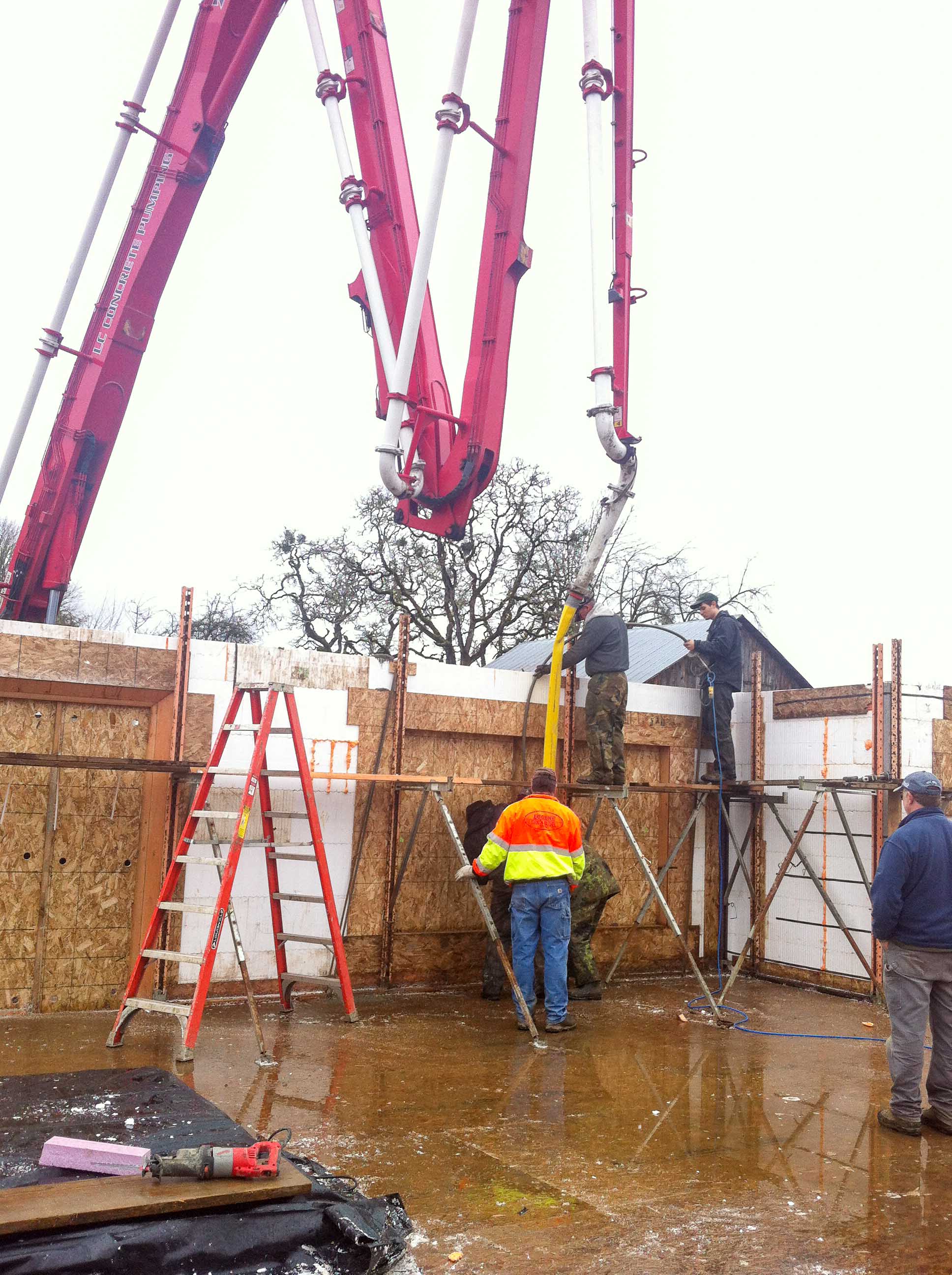 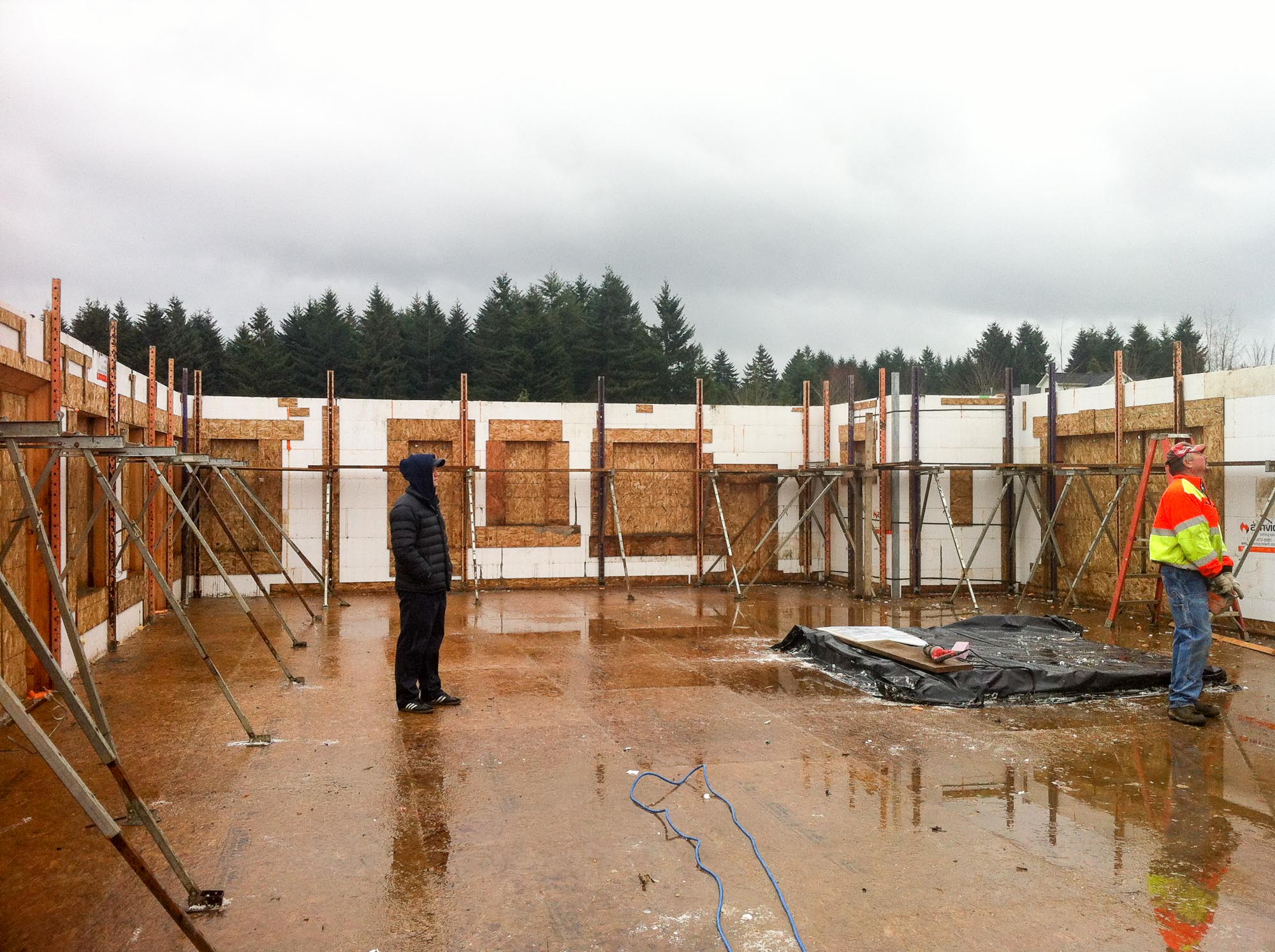 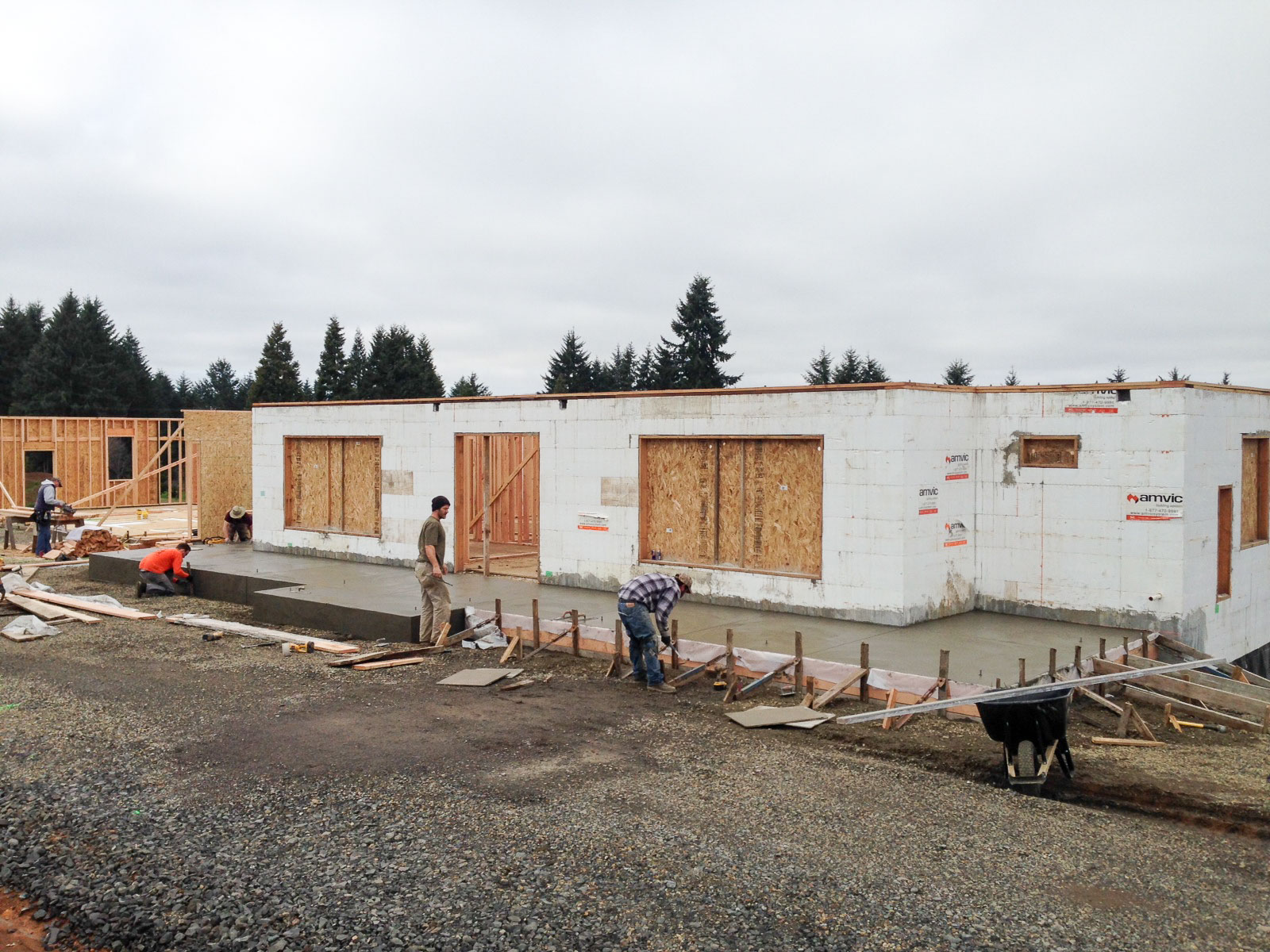 February 2014: The walls for the main floor have been poured, the garage is framed and walls are going up, and the front porch has just been poured!

This is when things really started to get fun in the construction process. Interior walls went up, trusses on the garage, etc. More on that soon!