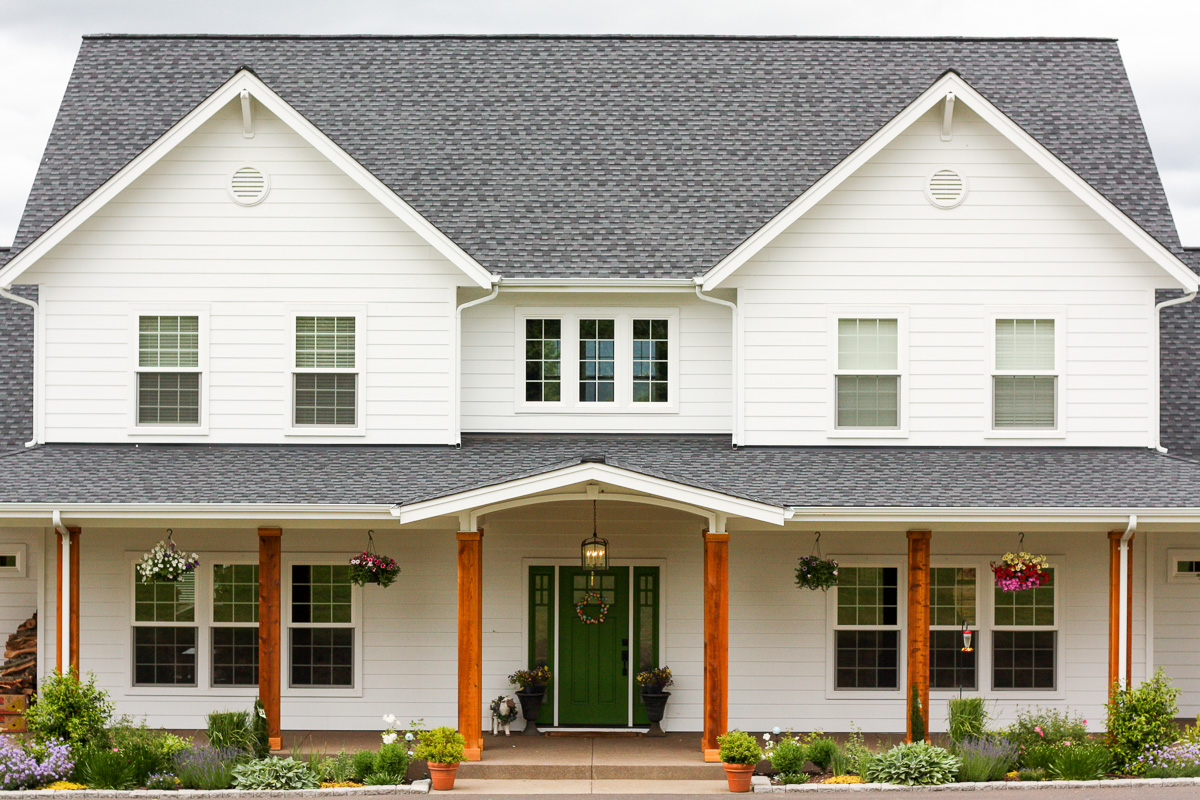 June 2017: We decided to wrap our white pillars in cedar, but I’m getting waaaaaay ahead of myself.

I’m so excited to start a new miniseries here on Lulu the Baker: Building a Modern Farmhouse. A little background information first. Longtime readers will remember that back in 2013, I started writing for Better Homes & Gardens’ Style Spotters blog, and chronicled the building our of modern farmhouse (a much more unique thing 5 years ago than it is now) with real time, monthly updates. My first post was literally the month we broke ground, and every month I showed pictures of the recent progress and talked about the process of building a dream house from the ground up. I talked about setbacks, challenges, design decisions, and more. It took 15 months for our house to be built (yikes!), and it was really wonderful for me to be able to look back on how much progress we made each month—evidence that we were, indeed, moving forward and that someday we’d actually have a finished house to live in!

Sadly, the Style Spotters blog is now defunct, and when it closed up shop, a lot of old content vanished into the ether, including the majority of my Dream House posts! I still have all the posts on Lulu the Baker that link to Style Spotters, but the links lead nowhere and the information and photos are gone. I get emails from readers every now and then asking about the process of building our modern farmhouse, and I want to be able to point them in a direction that will give them answers instead of frustration at broken links. I also want the photos and stories to exist and be preserved for my family.

For the next few weeks (or months or however long it takes because I don’t have a firm plan yet), I’m going to be sharing the story of how we built our modern farmhouse in the country. It’s a lot easier now to find the kinds of things we used—industrial-inspired light fixtures and sliding barn doors and whatnot—but I’ll share all of our sources and materials where I can. I’ve switched computers a couple of times since the beginning of this project, and I’m not at all conscientious about backing up computers and photos, so finding the original photos has taken time and is ongoing. But I’m really excited about this and hope that you’ll love reading about this project that was and is so important to us. I haven’t quite figured out how to break up the posts yet. Like I said, construction lasted for 15 months and was fraught with delays and setbacks. I probably won’t post updates by month, but rather by stage. We’ll see!

Now, to jump in and get started, we have to talk about our land. My husband and I moved to Oregon with our 10 month-old daughter over Labor Day weekend in 2006. Even though we’d just gotten out of the condo we owned in Las Vegas by the skin of our teeth and mere weeks before the market there collapsed, we were anxious to find a house to live in. Our very first week in Eugene, we drove out to a cute farmhouse about 15 minutes outside of town. It wasn’t the right house for us, but on the way back to town, we drove past a handwritten sign in the grass on the shoulder of the highway. It said, “Land for sale,” and it led us to a little piece of heaven at the top of a hill with sweeping views of the river valley to the north. 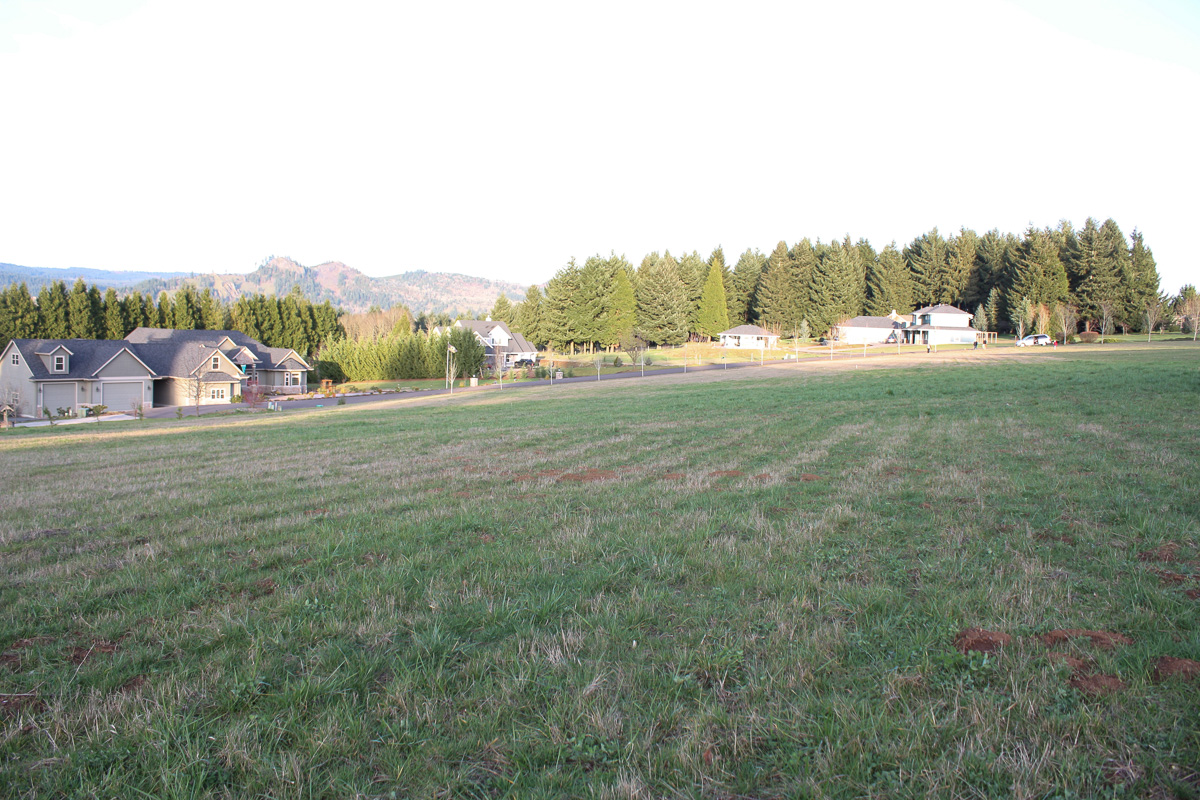 March 2013: the view to the northeast from the corner of our original land parcel.

We fell in love with the land instantly. But it was overpriced and far out of our range. We bought a little house in the suburbs with a typical suburban yard (tiny). We built raised beds and planted corn along our fence and kept chickens until the HOA demanded we relocate them. And every few months, we would call and ask the land agent if that hilltop parcel was still available and if it had come down in price. The owner wouldn’t budge on her asking price (which really was too high), but I think that’s what made this whole story possible because no one else was willing to pay that much. After four years of asking and asking and asking, we had finally saved enough to make her an offer in the summer of 2010, and she finally accepted. Land out here never sits on the market for long, certainly not for years. I think it was meant to be ours. 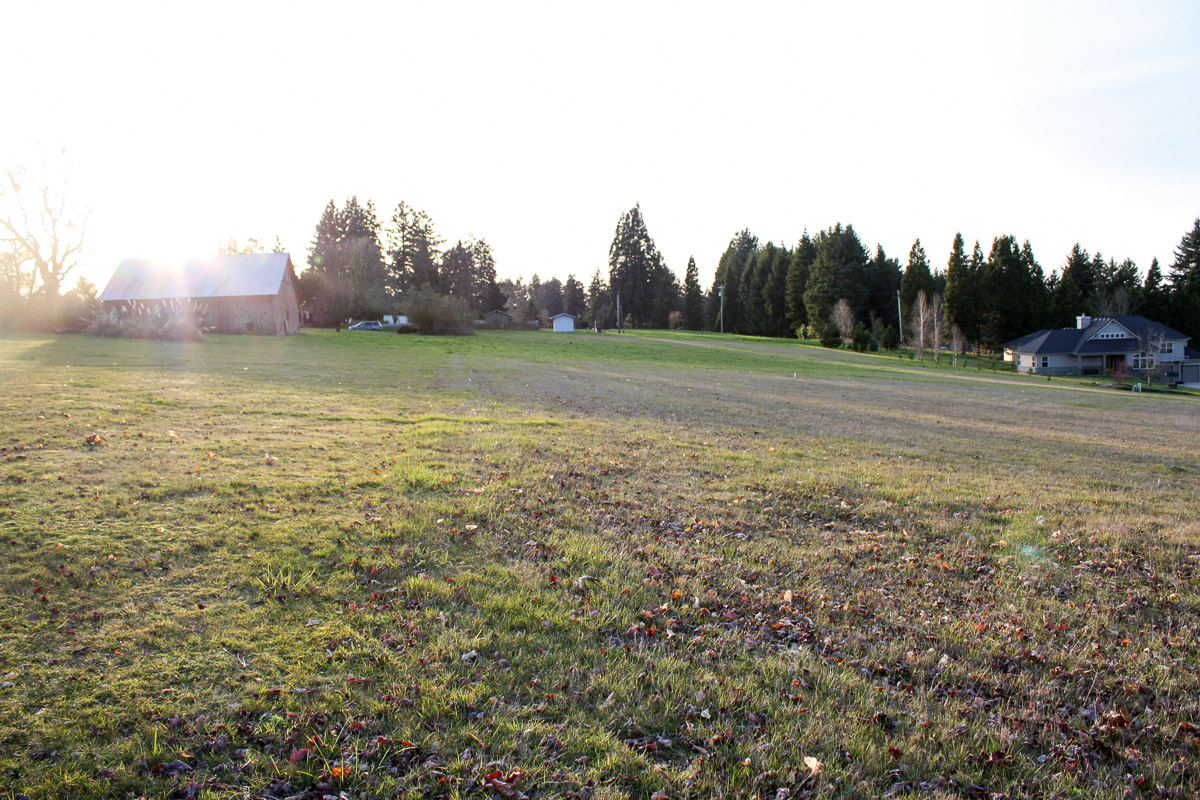 March 2013: This is one of my favorite shots of our land from when it was empty. I love the light and long shadows in the evening.

We’ve added to our land a bit in the 8 years since we bought it. Our uphill neighbors have been slowly selling off slivers and chunks of land, and we’re always eager to buy. There’s something crazy that happens when you buy a little land: you want to buy more and more and more. We’re up to 4+ acres at this point. We’ve added a large pasture for someday animals, an antique barn from the late 1800s, and some ancient, enormous oak trees. I think we’re done buying land at this point, but the house and land projects will probably be never-ending, which is exciting. 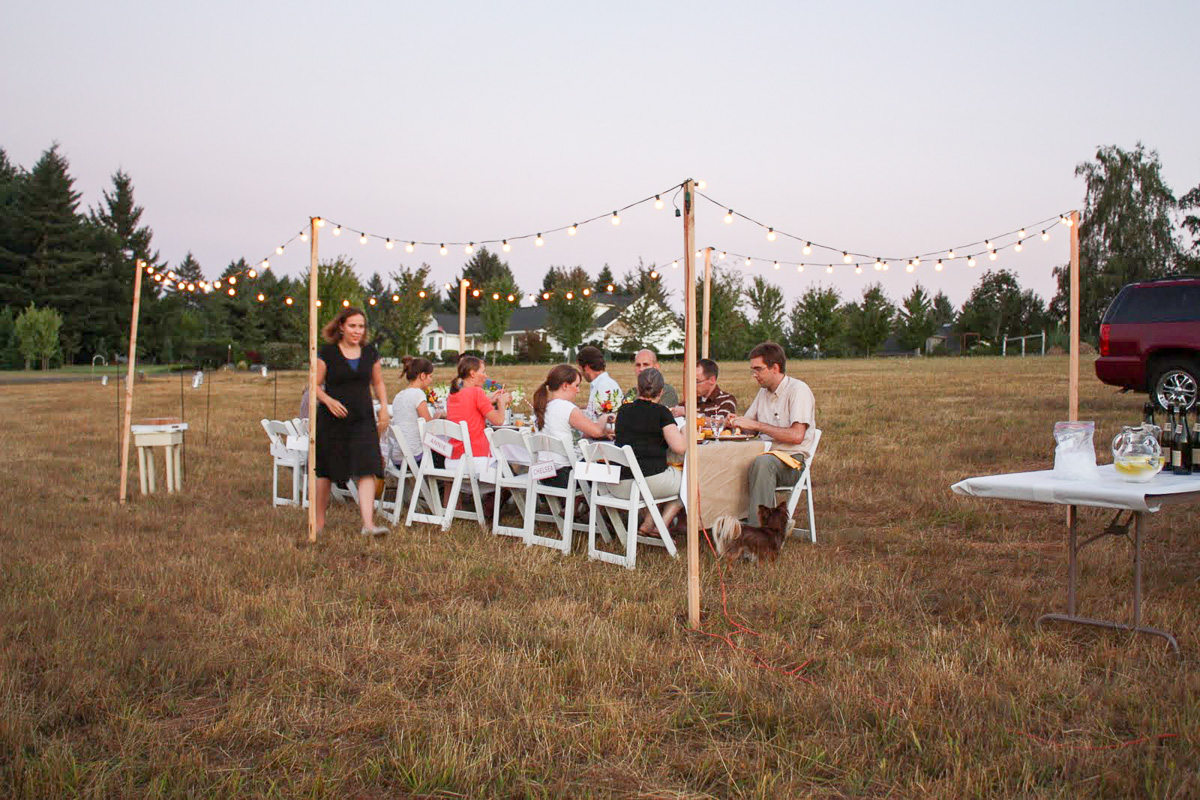 August 2010: A few months after we bought our land, we hosted a dinner party for our friend Annie who had just turned 30. She had always dreamed of having a dinner party in a big, open field, and we were happy to oblige.

OK, stay tuned for the next Building a Modern Farmhouse post where I’ll actually talk about building a modern farmhouse. 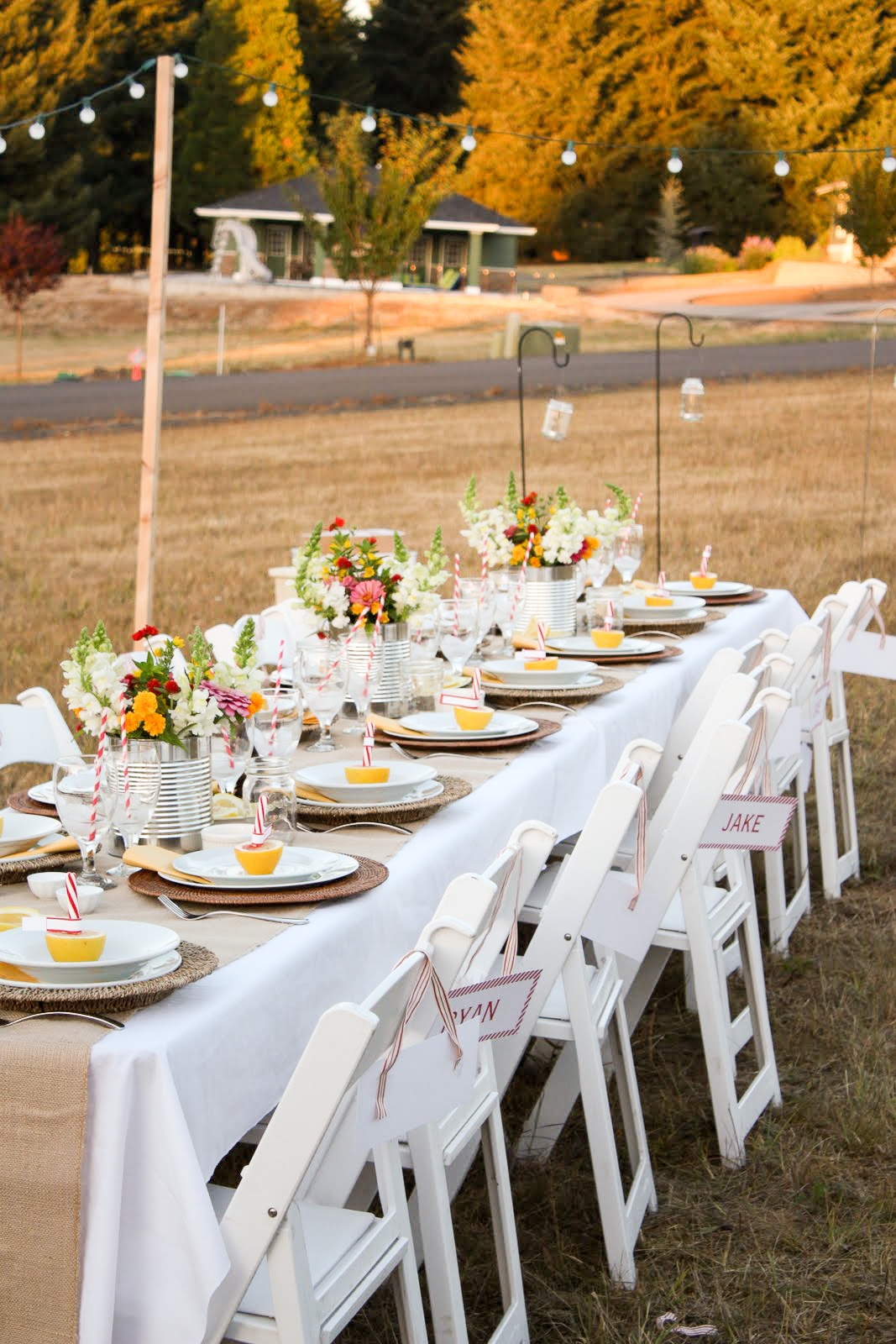 August 2010: Even before our house existed, this place was great for parties.