A great man once said, “There is a cinnamon roll for every occasion.”

Situation #1: It is just after dinner. You decide you want cinnamon rolls for breakfast in the morning, and you have nothing planned for the rest of the evening other than watching Monday’s episode of Gossip Girl on Tivo. 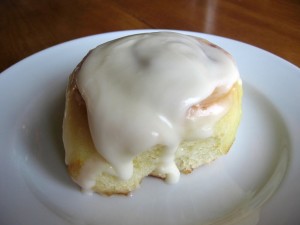 Cinnamon Rolls for the Occasion: Cinnamon Buns from The Sweet Melissa Baking Book. They take several hours of prep the night before (although those hours include lots of waiting, so you can catch up on Gossip Girl), and a final rise and bake in the morning. If you have the time, these are delicious, and definitely worth it .

Situation #2: It is just after dinner or just before bed or any time in between. You decide you want cinnamon rolls for breakfast, but you’ll be danged if you’re going to spend all evening prepping them. 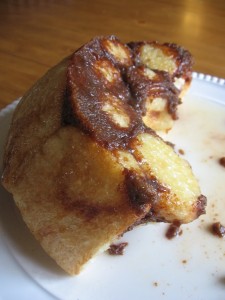 Cinnamon Rolls for the Occasion: Easy Overnight Cinnamon Rolls. They take about 5 minutes of prep the night before and bake right away in the morning. Finger-lickin’ pull-aparts surrounded by a buttery brown sugar and butterscotch filling. The only downside is you have to have raw, frozen dough blobs on hand. But they are really delicious.

Situation #3: It is morning. Cinnamon rolls sound really good. Or sticky buns. Those work too. 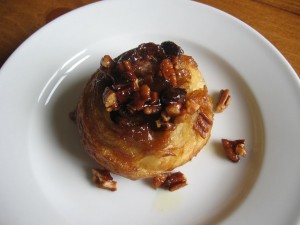 Cinnamon Rolls (or Sticky Buns in this case) for the Occasion: Sticky Buns from The Barefoot Contessa Back to Basics. Pecans, raisins, brown sugar, and cinnamon tucked between layers of buttery puff pastry and drenched in a caramely sticky sauce. So easy and so delicious. But only if you have puff pastry in your freezer.

Situation #4: It is morning. Cinnamon rolls sound really good. But you didn’t think about it until just this minute. And you don’t have any special ingredients on hand. Just the usual stuff. But you really want a cinnamon roll. Really. 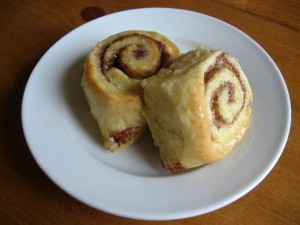 Cinnamon Rolls for the Occasion: Sweet Cinnamon Biscuits. A delicious cross between a flaky, homemade baking powder biscuit and a cinnamon roll. No yeast, no rising, no waiting. Ready in 30 minutes, start to finish. Really. 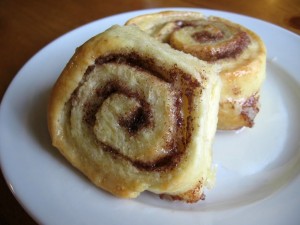 Preheat the oven to 400 degrees. Lightly grease a 9-inch round baking pan. Combine flour, baking powder, salt, and baking soda in a medium bowl and mix well. Stir in vegetable oil. Add buttermilk and stir until just blended. Knead the dough on a lightly floured surface until smooth. Roll dough into a 18×8-inch rectangle. Spread butter over the surface of the dough, leaving one of the long edges butter-free. Combine sugar and cinnamon in a small bowl, and sprinkle over the butter, leaving the same long edge free of cinnamon and sugar. Starting at the long edge that does have cinnamon and sugar on it and ending at the clean edge, roll up the dough. Pinch the seam shut. Cut the roll into twelve 1 1/2-inch slices. Arrange the slices in the prepared pan, and bake until golden, about 15 to 20 minutes. Remove from the oven. If you want, you can make a thick glaze out of powdered sugar, milk, and cream cheese to drizzle over the warm biscuits.

*If you don’t have buttermilk in your fridge, you can make some by combining 1 Tablespoon of white vinegar with 1 cup of milk, and letting it sit for 5 minutes. But this recipe only calls for 3/4 cup buttermilk, so don’t use all of it!

3 thoughts on “Cinnamon Biscuits: For When You Just Can’t Wait”