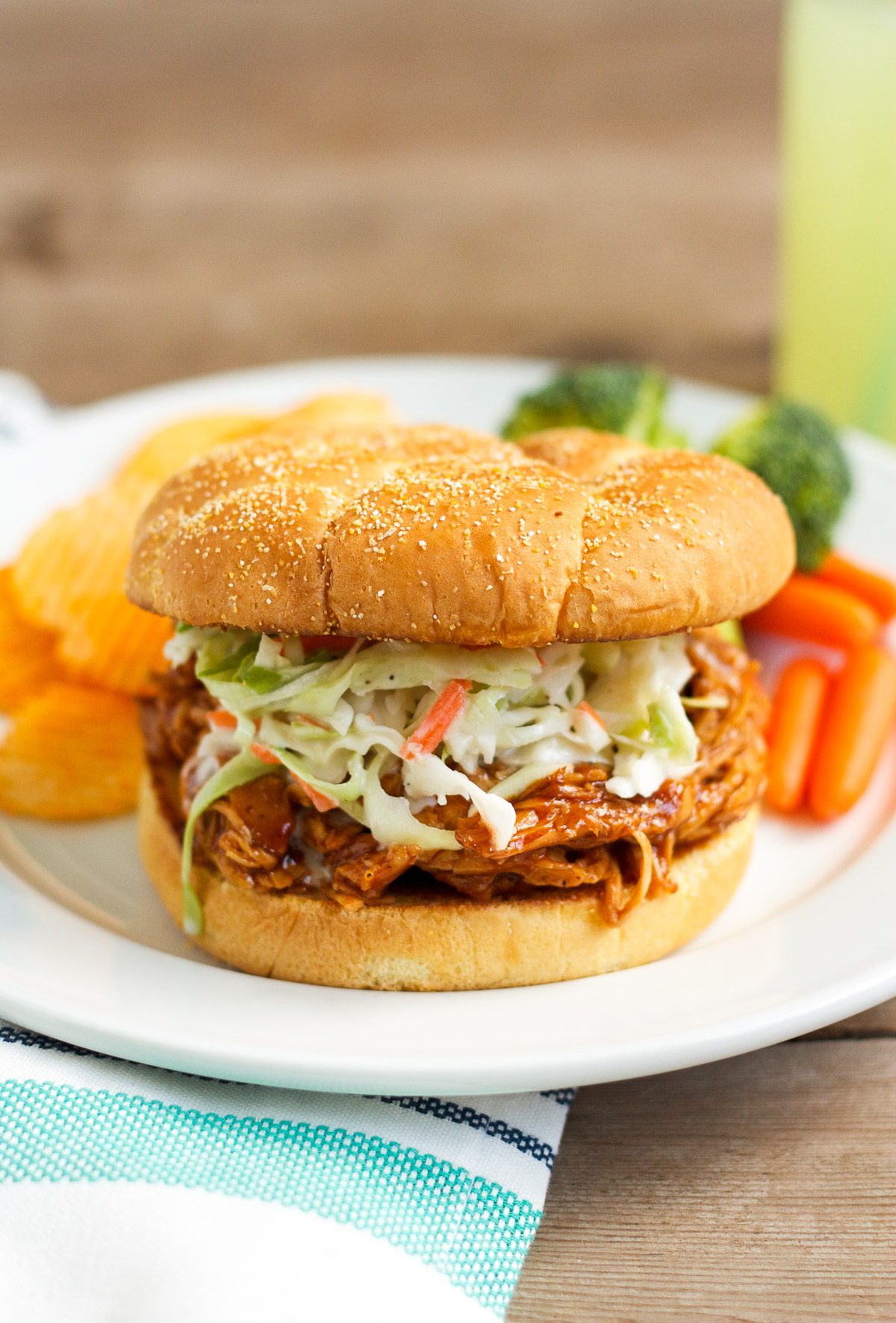 If you follow my This Week’s Menu Ideas series, you’ve probably noticed that a few dinners pop up regularly in our weekly meal planning, like these delicious barbecue chicken sandwiches. I can’t help it! Every time I make them and eat them, I wonder just how soon I can make them again, because they are that amazing. Earlier this summer, I decided to make barbecue chicken sandwiches for dinner, but I decided that it was time to try something new. I love barbecue sandwiches, but we just didn’t have a go-to recipe that consistently turned out delicious…until now! 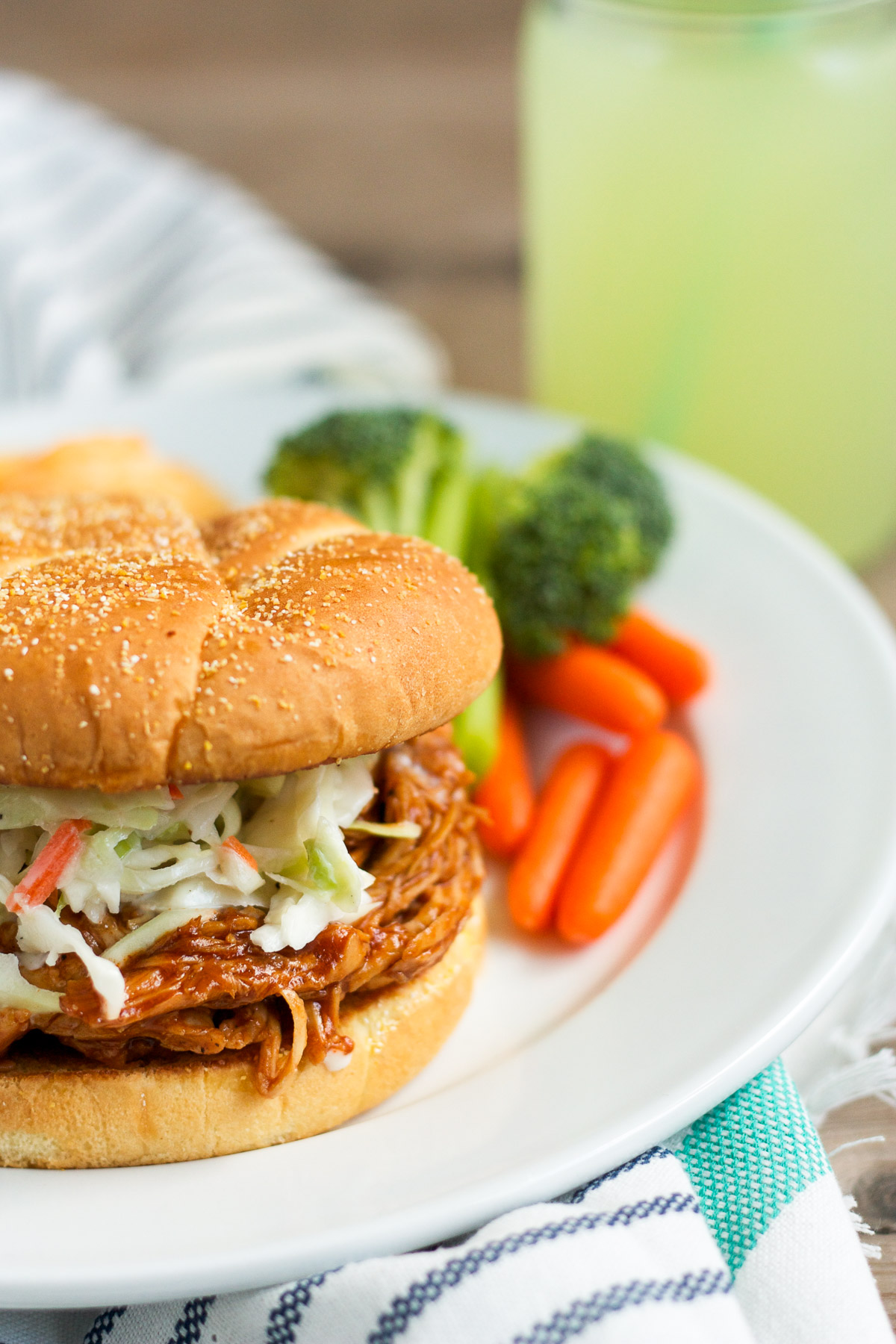 If we were going to build a better barbecue chicken sandwich, we needed to work from the bottom up. We started buttering hamburger buns and browning them on a griddle earlier this year for burgers, and it instantly improved our burger game by a mile. I knew a better bun would be the first step toward a killer chicken sandwich, and it has proven to be a fantastic change. Buttering the buns and cooking them on the griddle prevents them from soaking up all the barbecue sauce and getting soggy. And butter and a little crispness reminiscent of a grilled cheese sandwich? Yum!

The next part of the sandwich that needed perfecting was the barbecue chicken—the main component! Now I appreciate a good crockpot recipe as much as anyone; I have lots of tried and true slow-cooker recipes that my family loves. But I just haven’t found a crockpot barbecue chicken that I love. The chicken always turns out OK, but I just had a feeling it could be better than OK. The Pioneer Woman has a great recipe for barbecue chicken cooked in the oven, not the slow-cooker, so I tried her method with a few tweaks, and the chicken was amazing! Tender but not mushy, and so flavorful. The chicken was perfect, and only required a few minutes more than just throwing ingredients in a crock pot.

Now, in my opinion, a barbecue sandwich just isn’t complete without a heaping spoonful of cool, creamy cole slaw on top. I didn’t have to look far to find a fantastic cole slaw recipe—I’ve been making a great one for years. It is fresh, easy, and delicious, and you can make it ahead of time and pop it in the fridge until dinner. 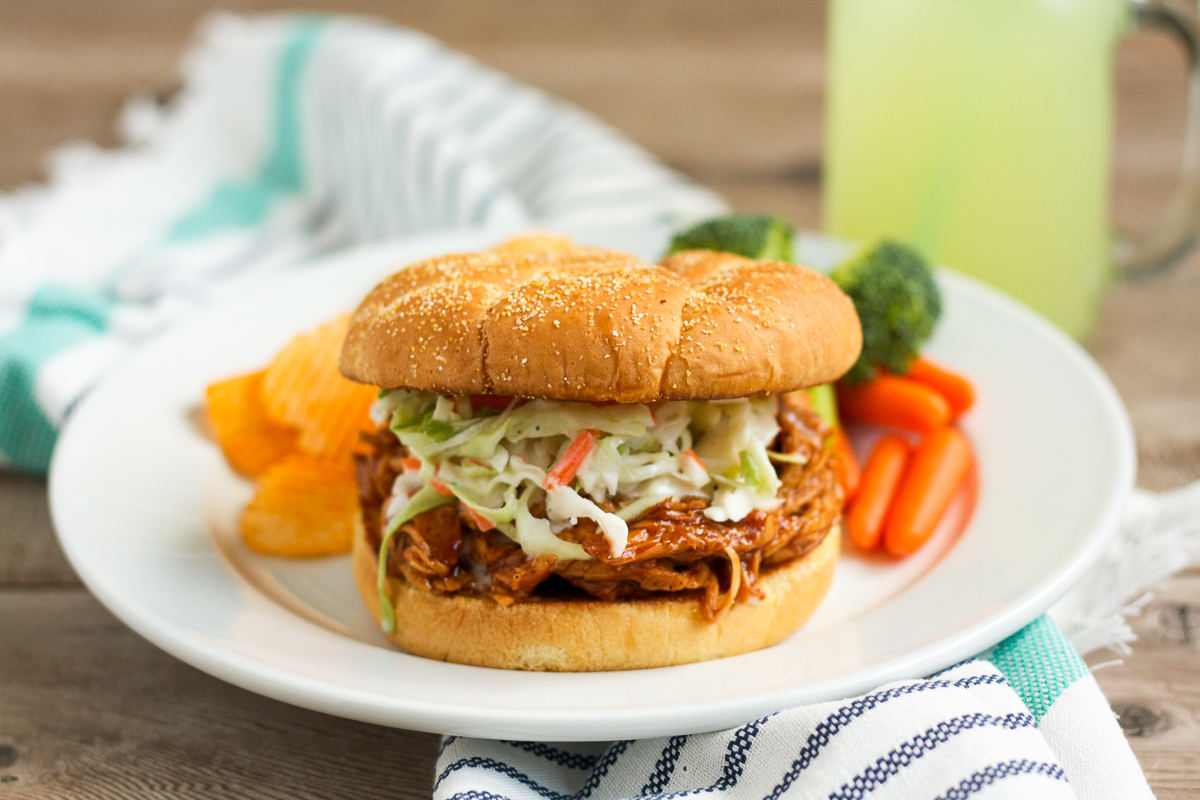 With buttered and griddled buns that won’t get soggy or mushy, hearty, flavorful, shredded chicken, and cool, tangy cole slaw, these sandwiches are sure to become an instant favorite. I promise they’ll knock your socks off!

Print
Prep time
30 mins
Cook time
1 hour 30 mins
Total time
2 hours
These delicious barbecue chicken sandwiches, topped with creamy cole slaw, are so tasty, you'll want to have them every week! adapted from The Pioneer Woman
Serves: 8
Ingredients
for the cole slaw
for the chicken
Instructions
Notes
You might be tempted to use frozen chicken in this recipe, but make sure to thaw it first. Otherwise, the sauce will be watery.

Don't skip the step where you brown the chicken before adding it to the sauce. It makes a huge difference in both flavor and texture.

I used to just griddle hamburger buns and then stack them on a plate to cool, but that makes them get soggy and flat. Going to the extra trouble of putting the griddled buns on a cooling rack to cool ensures that they hold their shape and add a very pleasant crispness to the sandwich.
3.5.3208 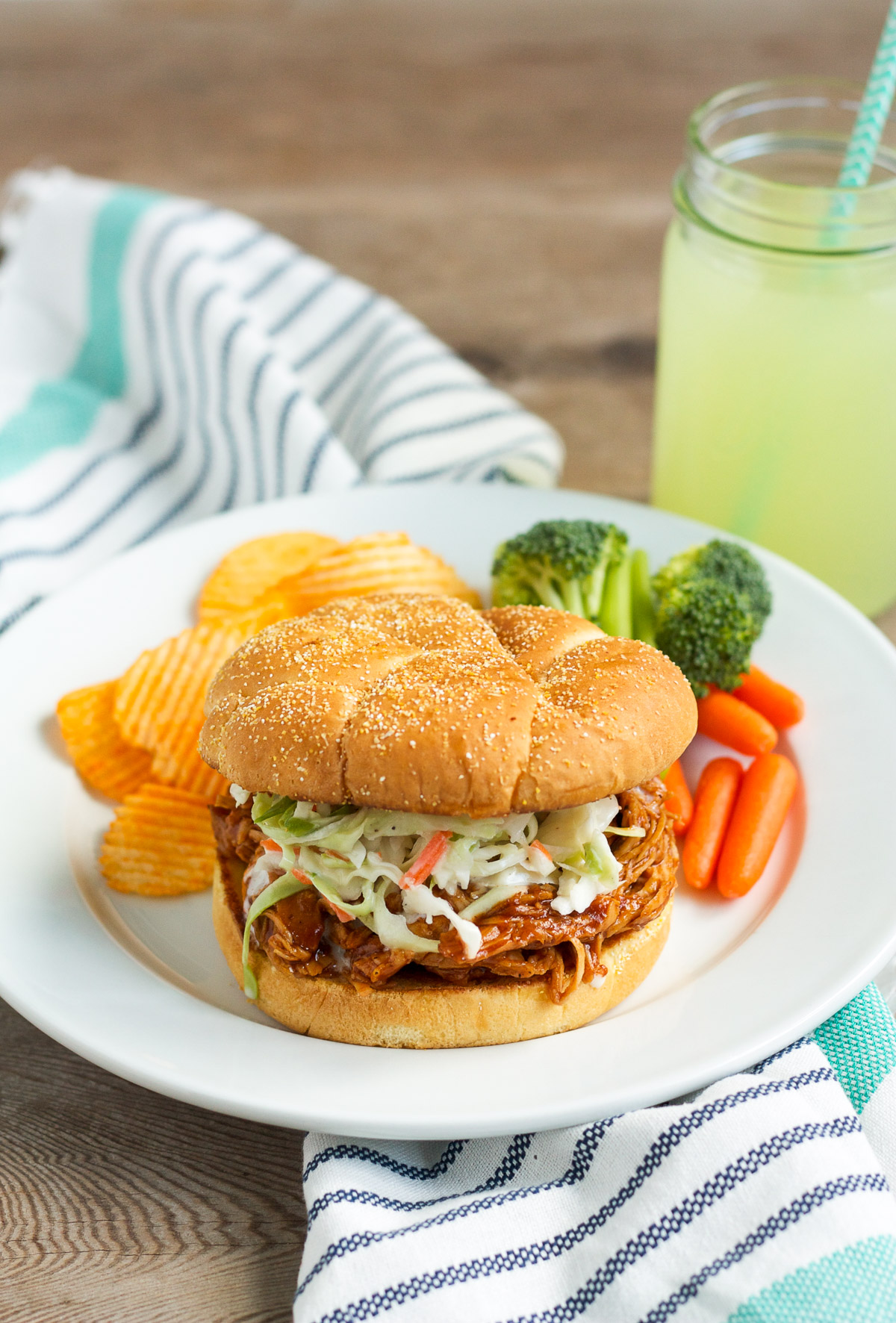